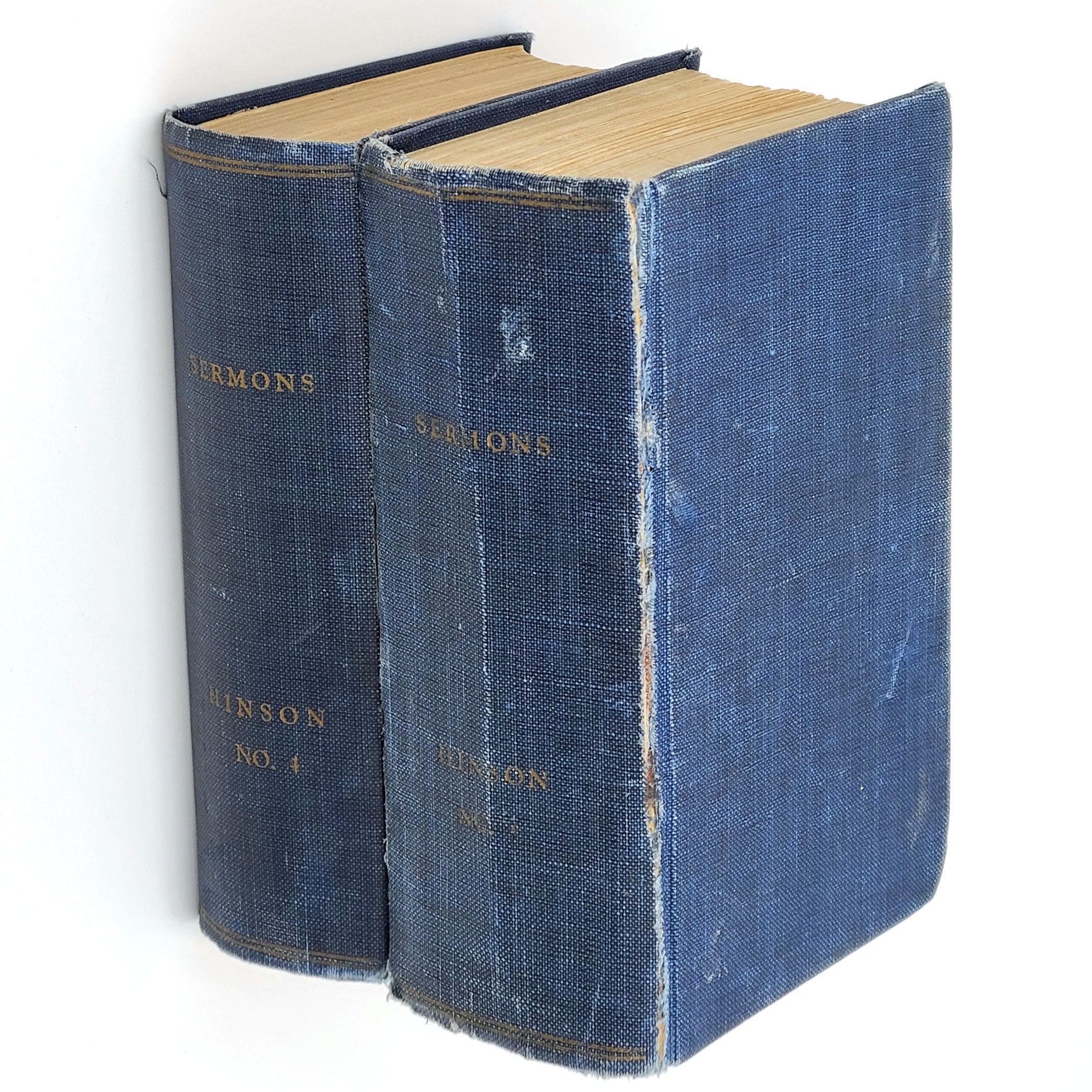 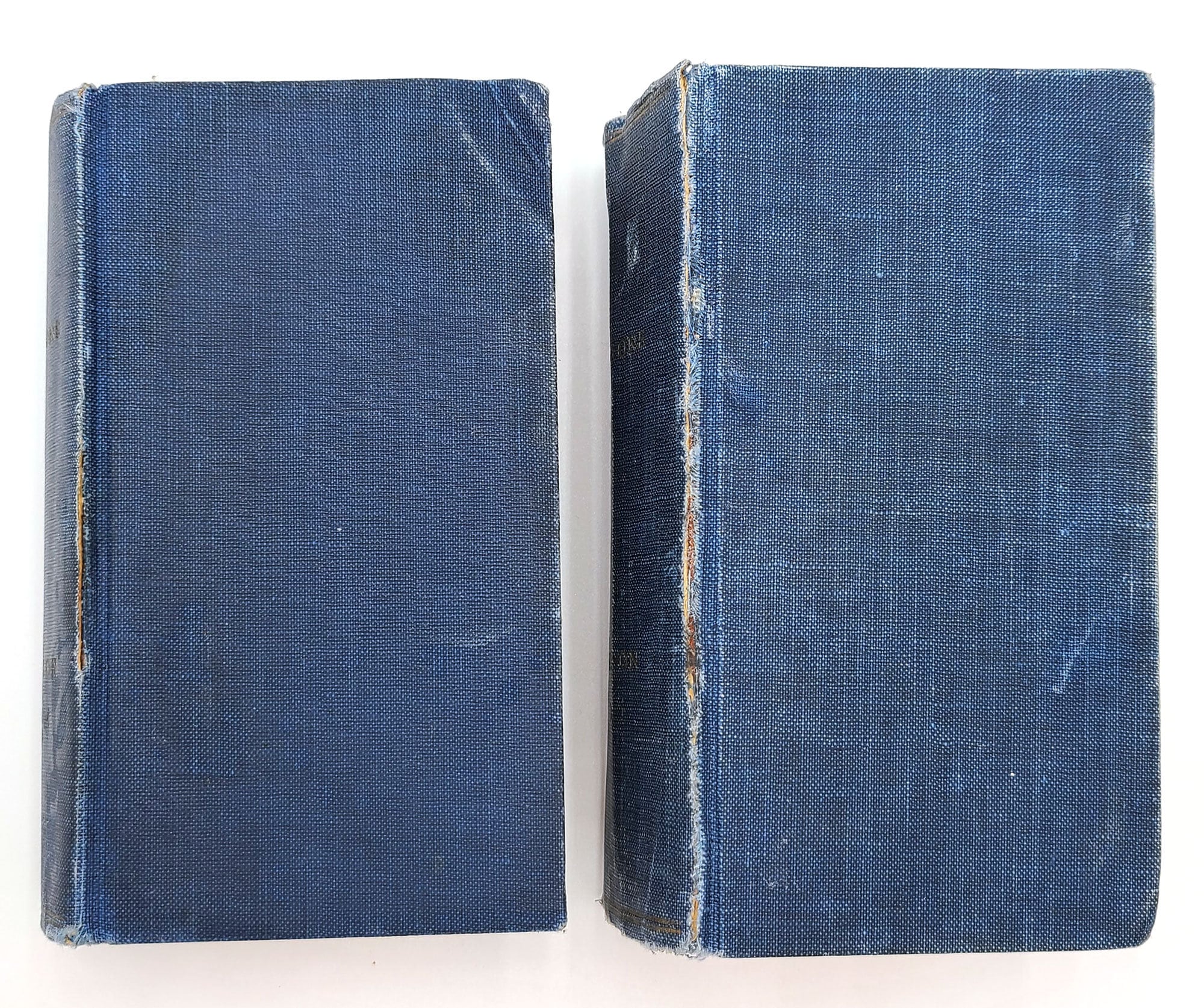 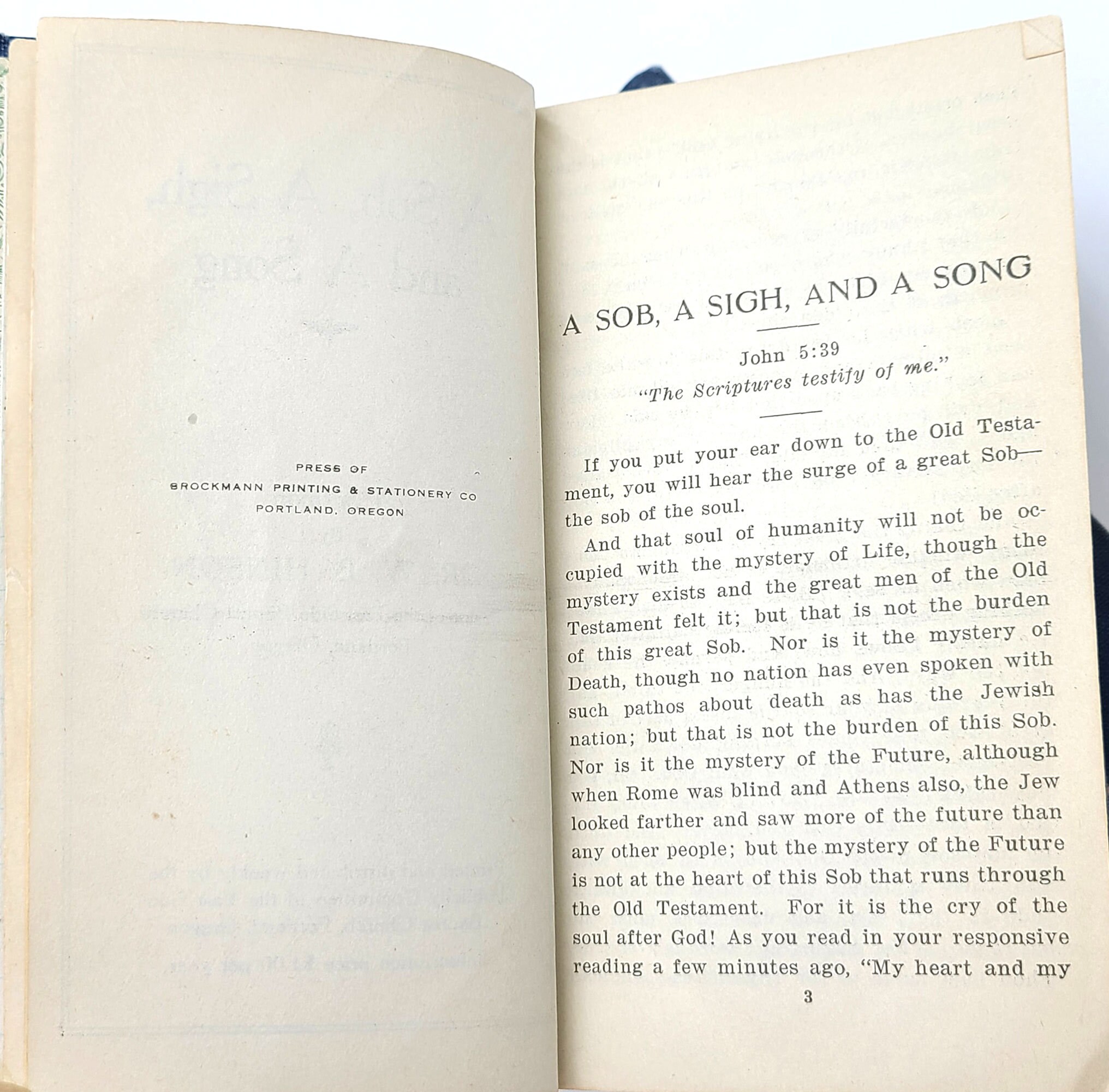 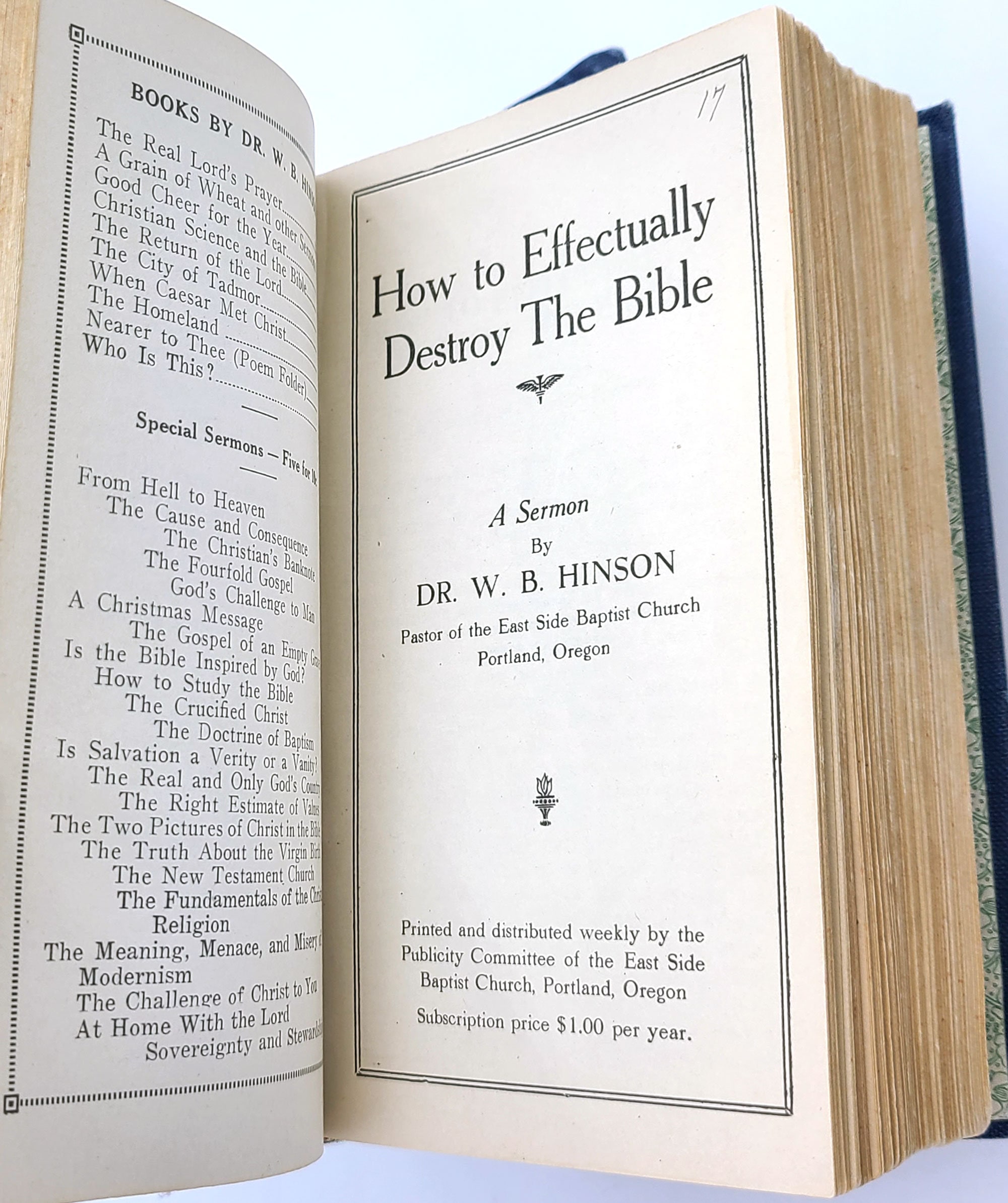 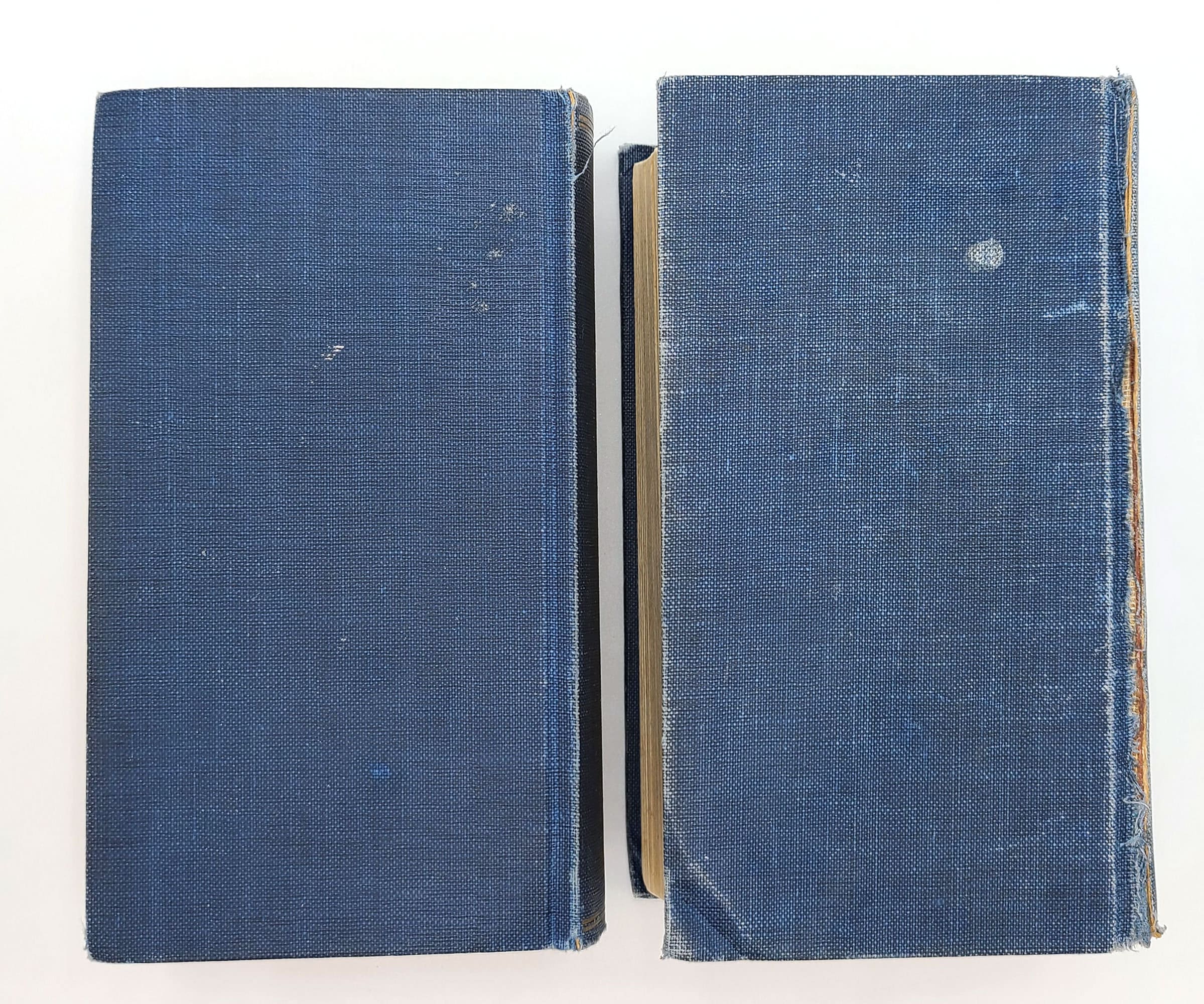 Description: Two bound volumes of pamphlets (107 total), which were originally issued on a weekly basis sometime between 1917 and 1926. Bound in blue cloth with gilt lettering on spine. Volume No.1 each of the pamphlets referenced Bible verses written on the blank front flyleaf. The volumes are stamped on the spine as No. 1 and No. 4 (originally part of a set of four). Each volume is approximately 750 pages (about 1500 pages total). 5.6 x 3.3 inches.

Volume No. 4 has a list of the pamphlets included laid in, with verse references, this being the notes of Pacific Northwest church architect John W. Foster. This appears to have been part of his working notes for his book Four Northwest Fundamentalists [Walter Benwell Hinson, John James Staub, Mark Allison Matthews, Albert Garfield Johnson], published in late 1975.

Vol. No. 4 has the name of Dr. E. A. Weir written on the verso of the flyleaf. Dr. Edward Andrew Weir (1867-1946) had been a member of East Side Baptist Church. He taught men's classes at the church and also served as the state chaplain for the Gideons.

Rev. Dr. Walter Benwell Hinson (1862-1926) was an English-born Baptist minister who held pastorates in Montreal, Vancouver, and San Diego, prior to coming to Portland. He served as the minister at Portland's White Temple (1910-1917) and East Side Baptist Church (1917-1926). He also served as general evangelist for the American Baptist Home Missions Society. At the time of his death, it was estimated that thirteen million of his sermon pamphlets had been distributed all around the world. In late 1925, he organized the Portland Baptist Bible Institute (in 1927 renamed the Western Baptist Theological Seminary).

Publisher: Publicity Committee of the East Side Baptist Church
Place: Portland, Oregon
Year: between 1917 and 1926