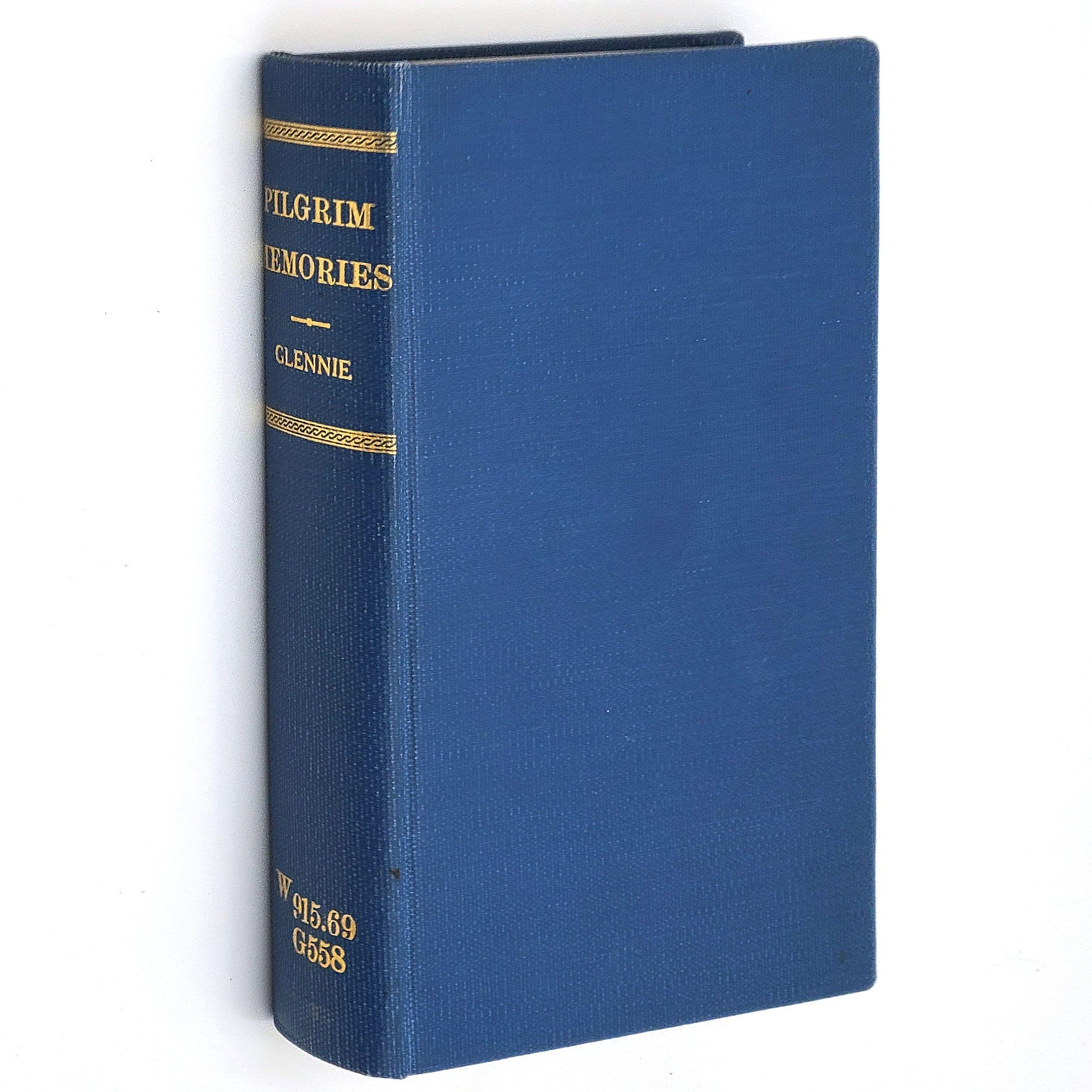 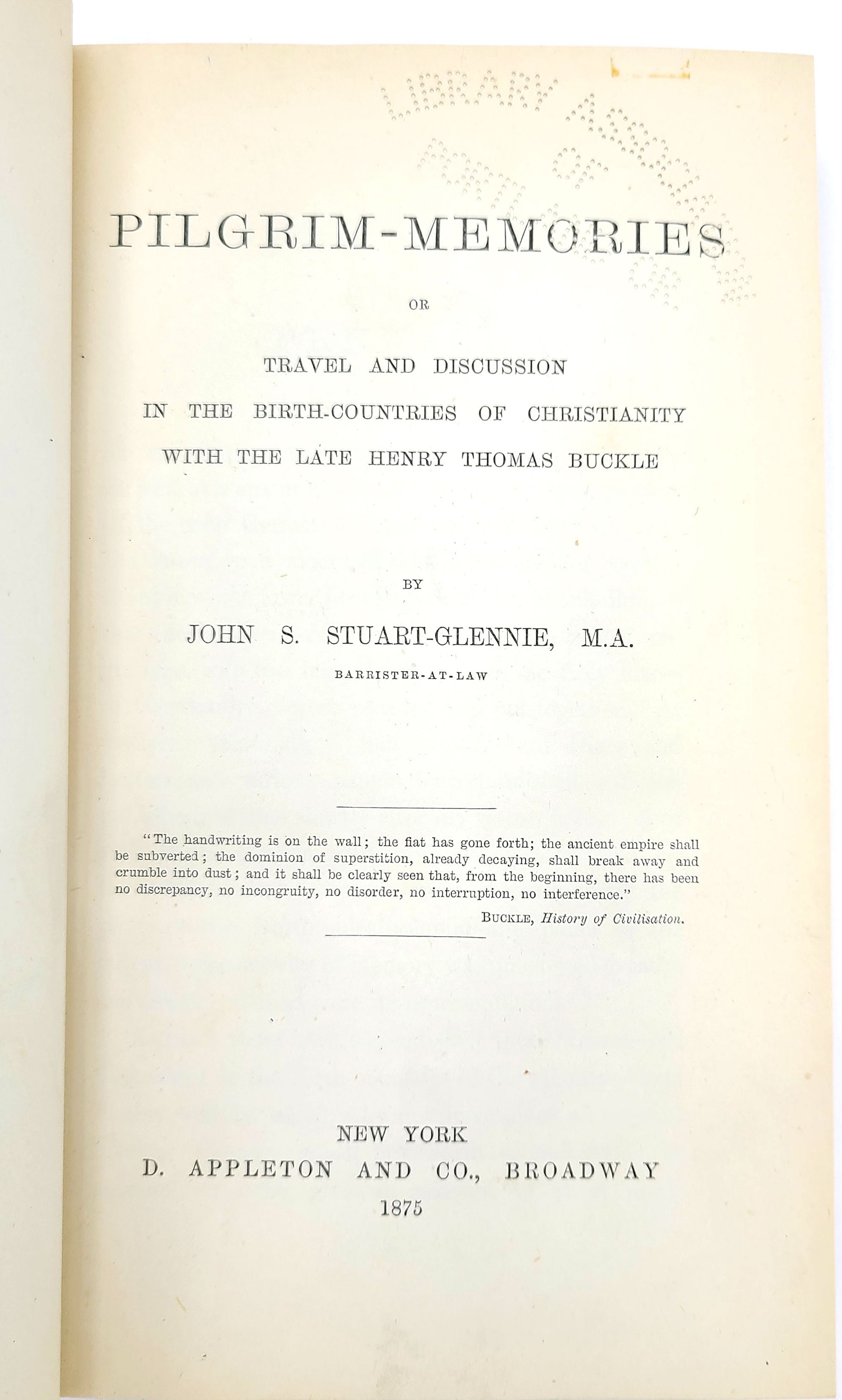 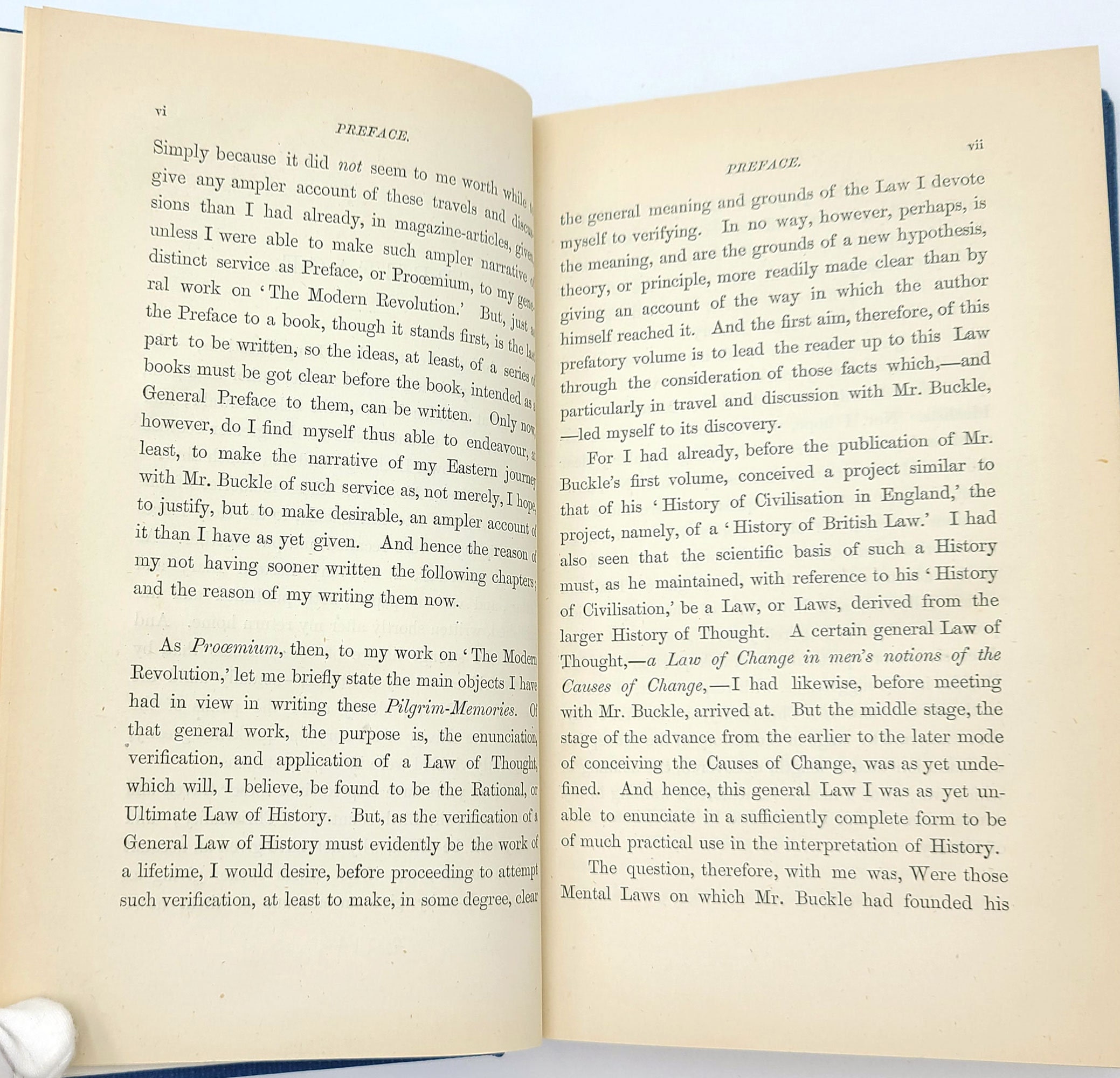 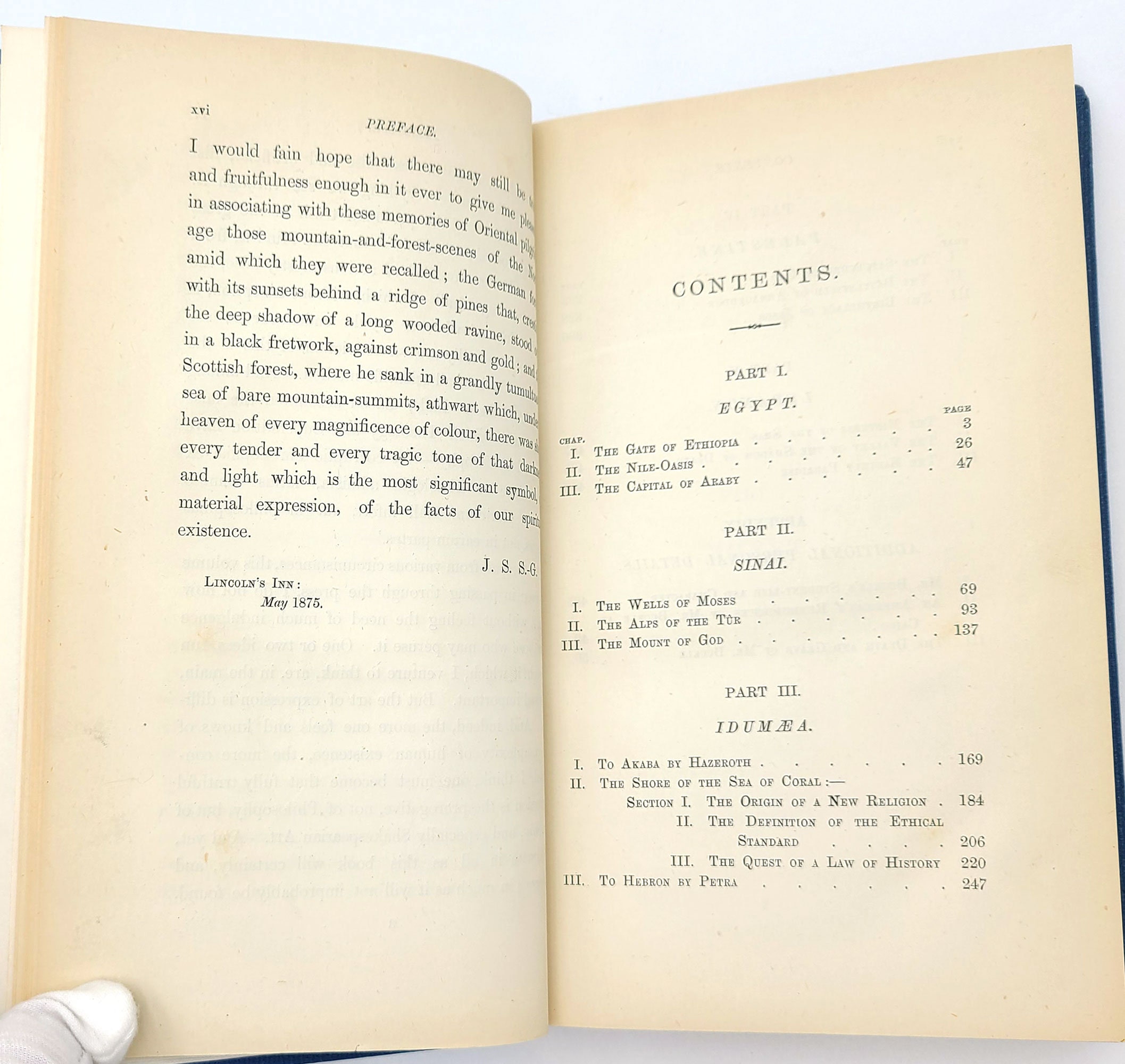 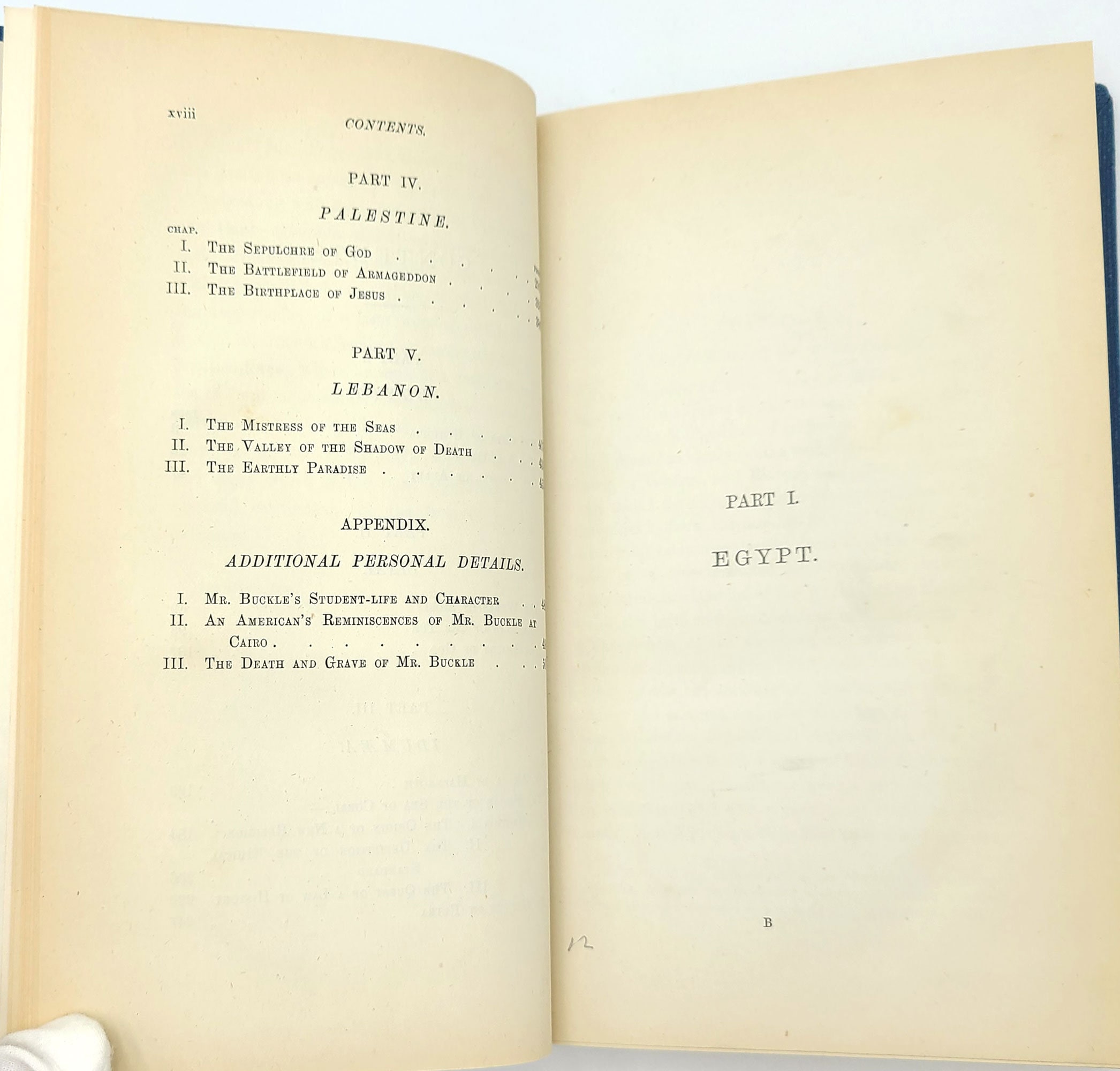 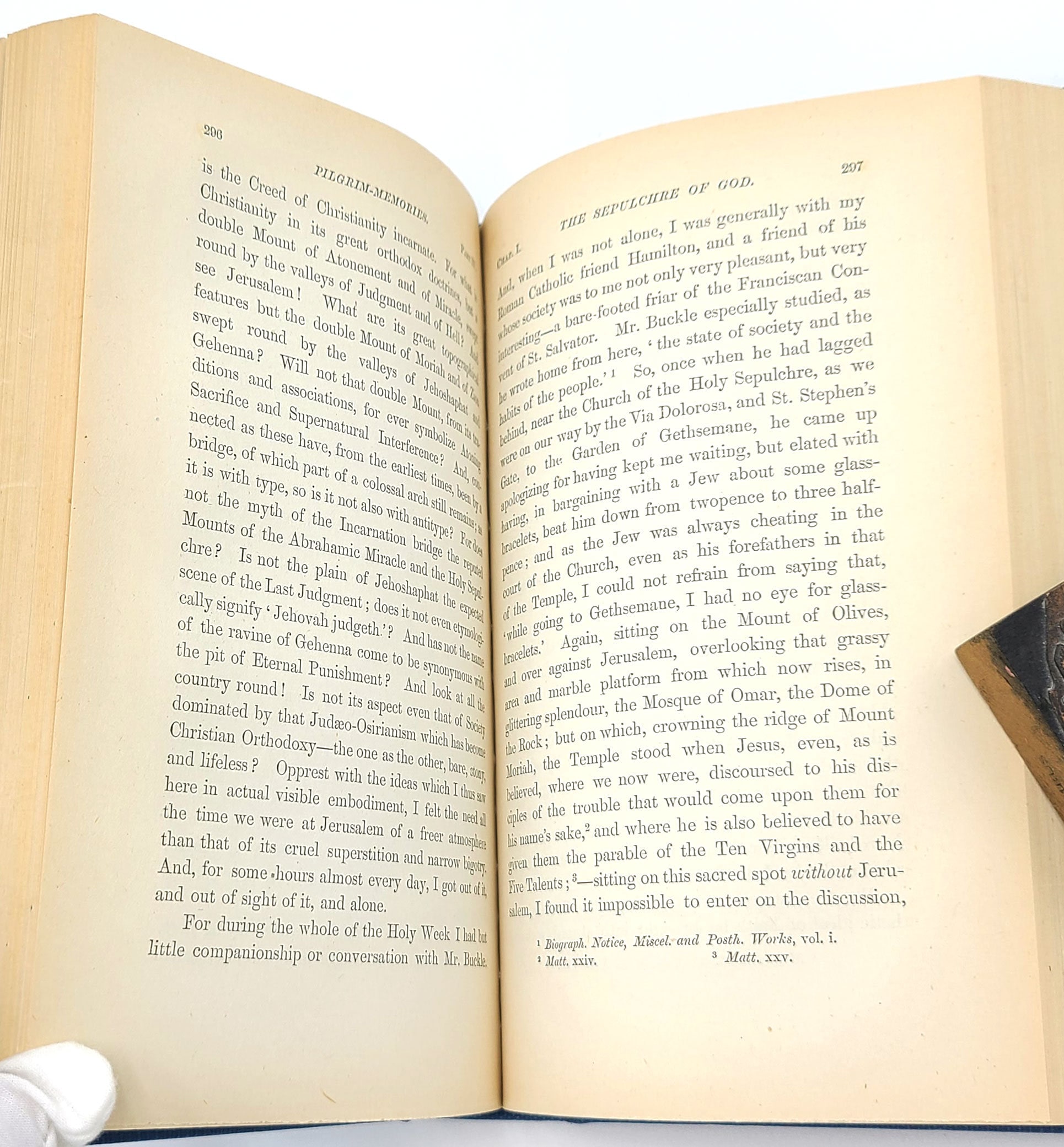 Title: Pilgrim-Memories or Travel and Discussion in the Birth-Countries of Christianity with the Late Henry Thomas Buckle

Description: Ex-library (non-circulating). Bound in blue library cloth with gilt stamped spine. Library rubber stamp to top edge of text block. Pinhole library stamp on title page and one other leaf and penciled marginalia appears off and on through the first 130 pages or so, else generally clean; no library pocket. xviii, 514, plus [6] advertising pages. 8.6 x 5.25 inches.

A philosophical examination and discussion of a tour of the Near East undertaken in 1861-62 by John Stuart-Glennie and his traveling companion, the English historian, Henry Thomas Buckle. Throughout the course of the tour there occurs an appraisal of Christianity's birthplace and early history replete with philosophical speculation from the sympathetic, but skeptical, materialist-rationalist perspectives of the author and Mr. Buckle, regarding religion's place in the lawful progress of civilizational history.

Contents:
[Part I, Egypt]: The Gate of Ethiopia. The Nile-Oasis. The Capital of Arabia.
[Part II: Sinai]: The Wells of Moses. The Alps of the Tur. The Mount of God.
[Part III, Idumaea]: To Akaba by Hazeroth. The Shore of the Sea of Coral (The Origin of a New Religion; The Definition of the Ethical Standard; The Quest of a Law of History).
[Part IV: Palestine]: The Sepulchre of God. The Battlefield of Armageddon. The Birthplace of Jesus.
[Part V, Lebanon]: The Mistress of the Seas. The Valley of the Shadow of Death. The Earthly Paradise.
[Appendix: Additional Personal Details]: Mr. Buckle's Student-Life and Character. An American's Reminiscences of Mr. Buckle at Cairo. The Death and Grave of Mr. Buckle.

John Stuart Stuart-Glennie (1841-1910) was a Scottish barrister, folklorist, philosopher, sociologist, and socialist. Henry Thomas Buckle (b. 1821) was the author of History of Civilization in England. He died at Damascus during their travels in May 1862.