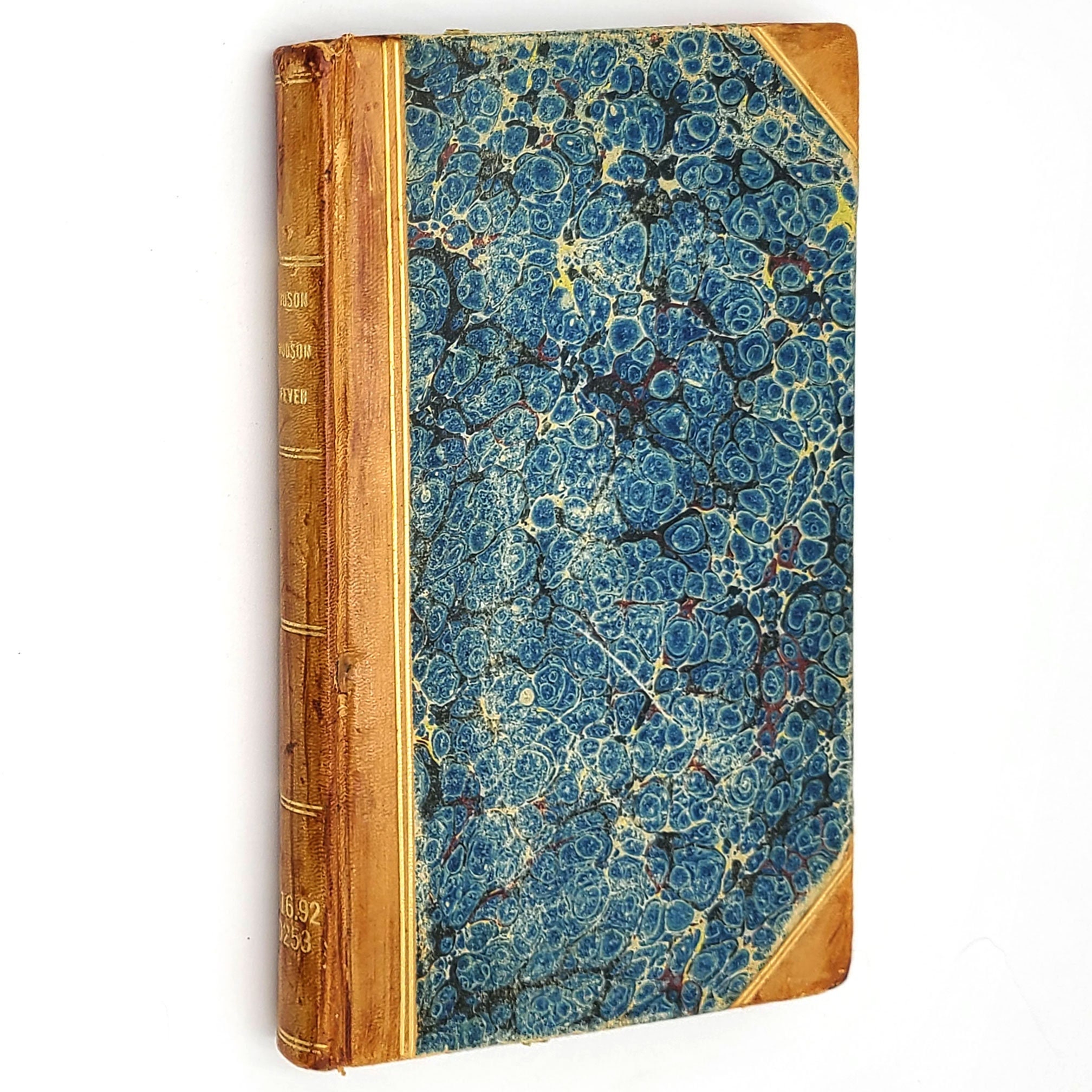 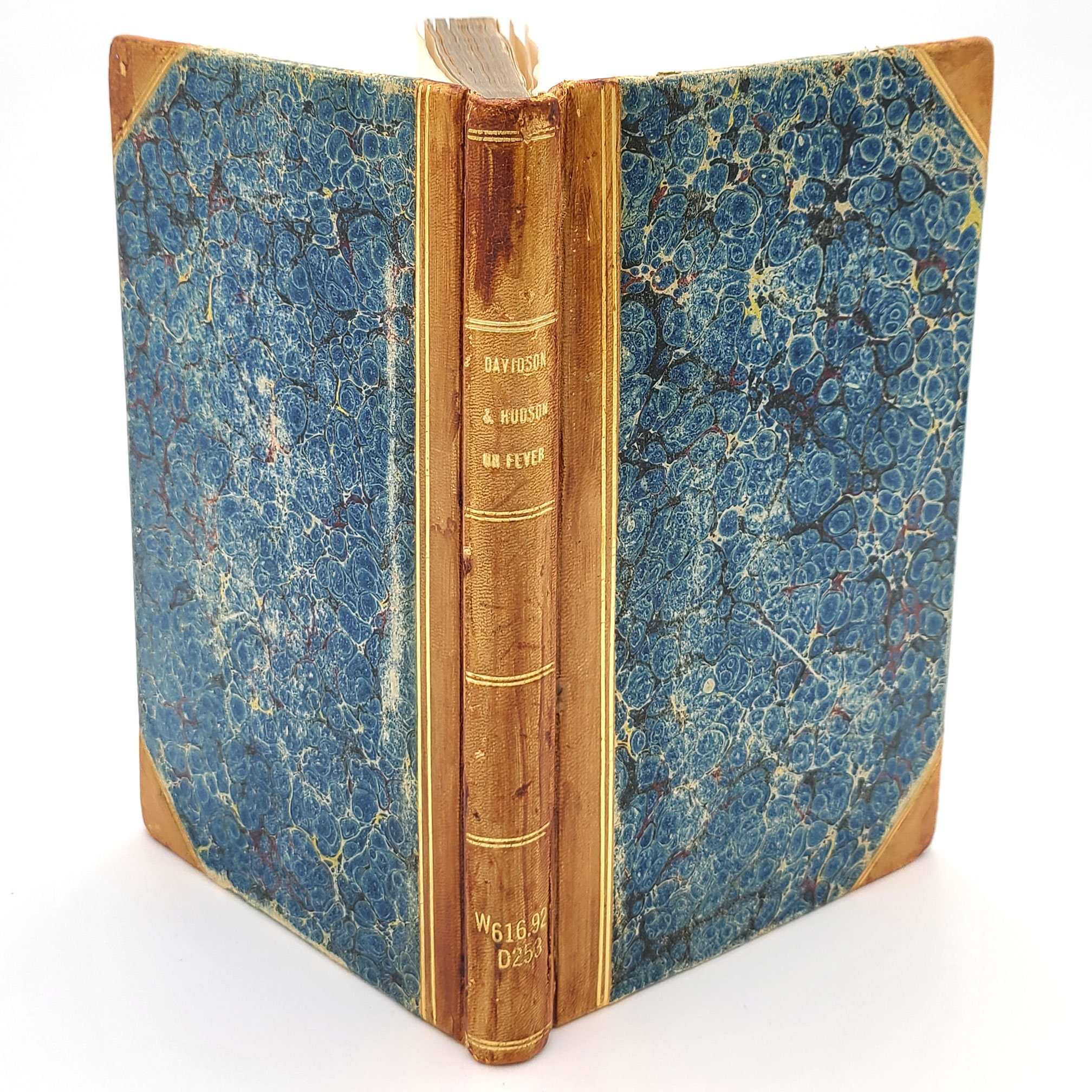 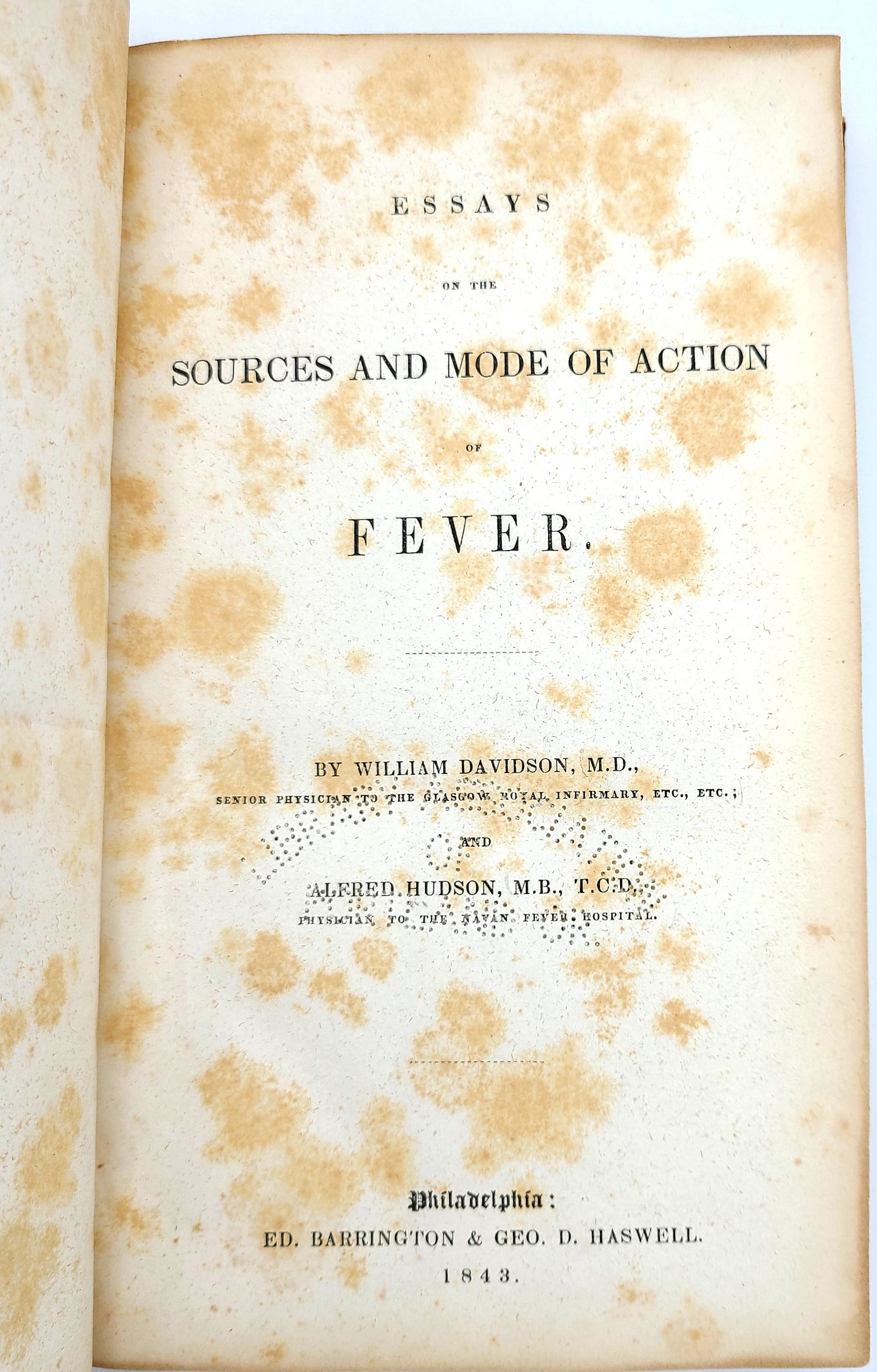 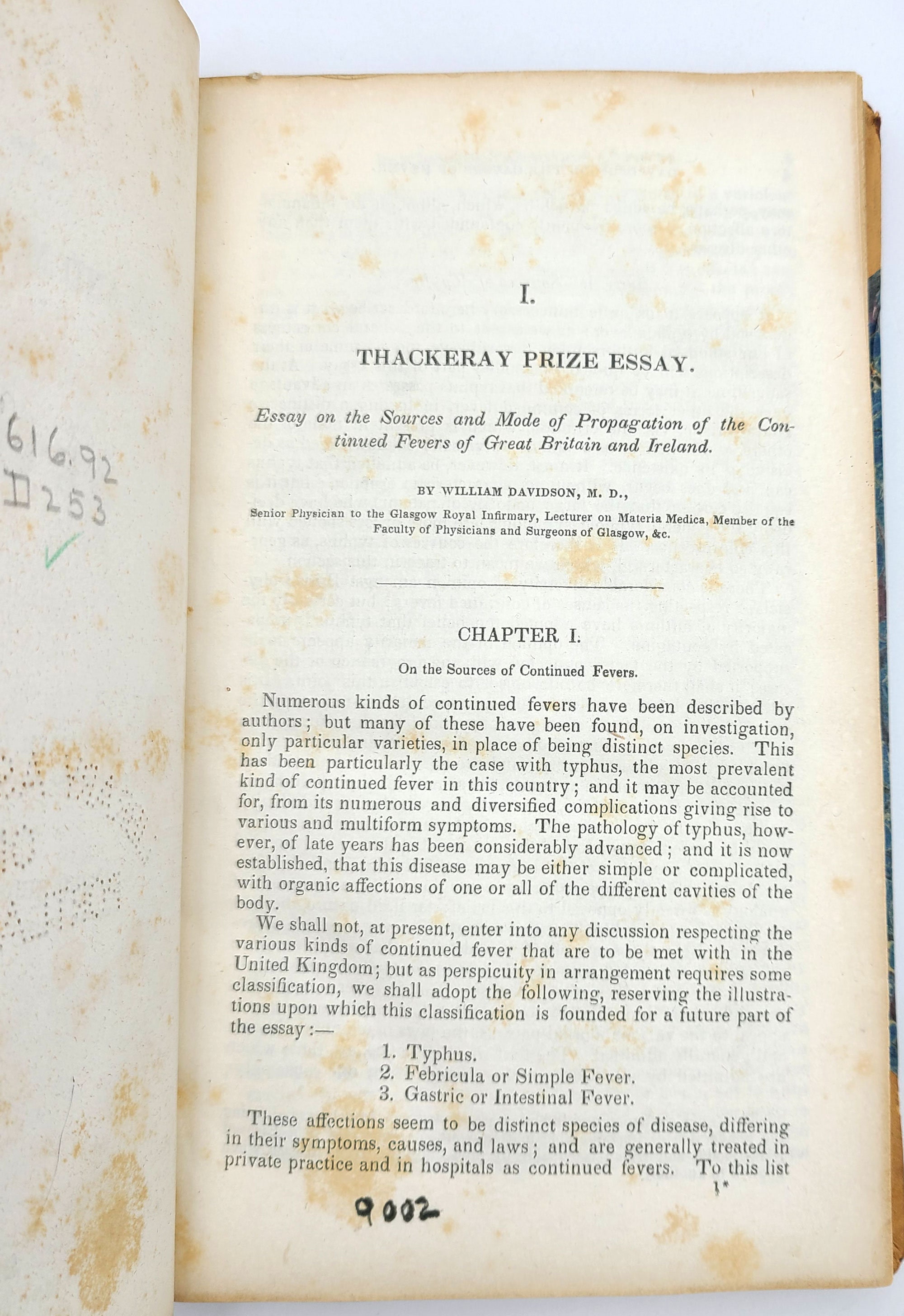 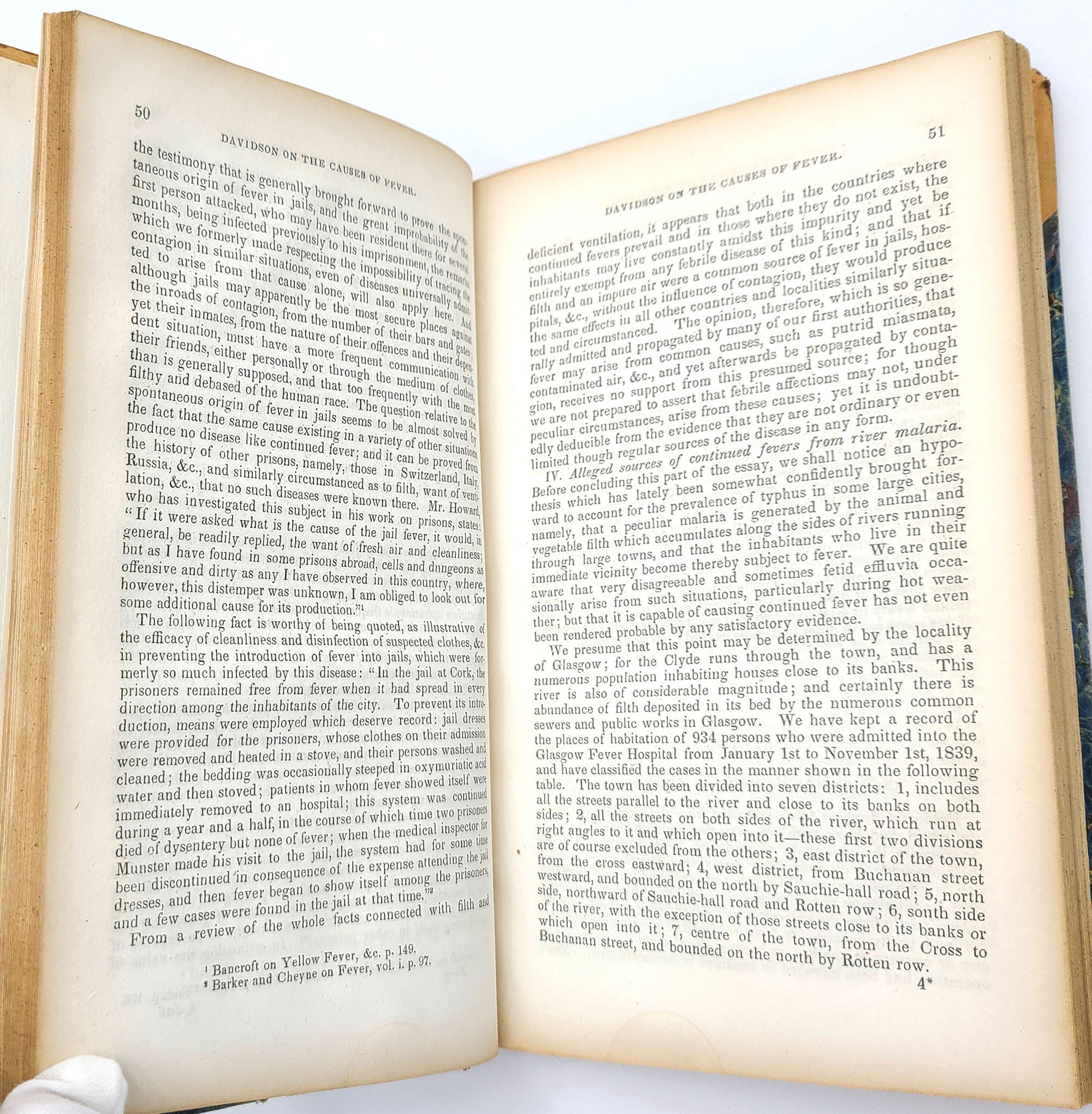 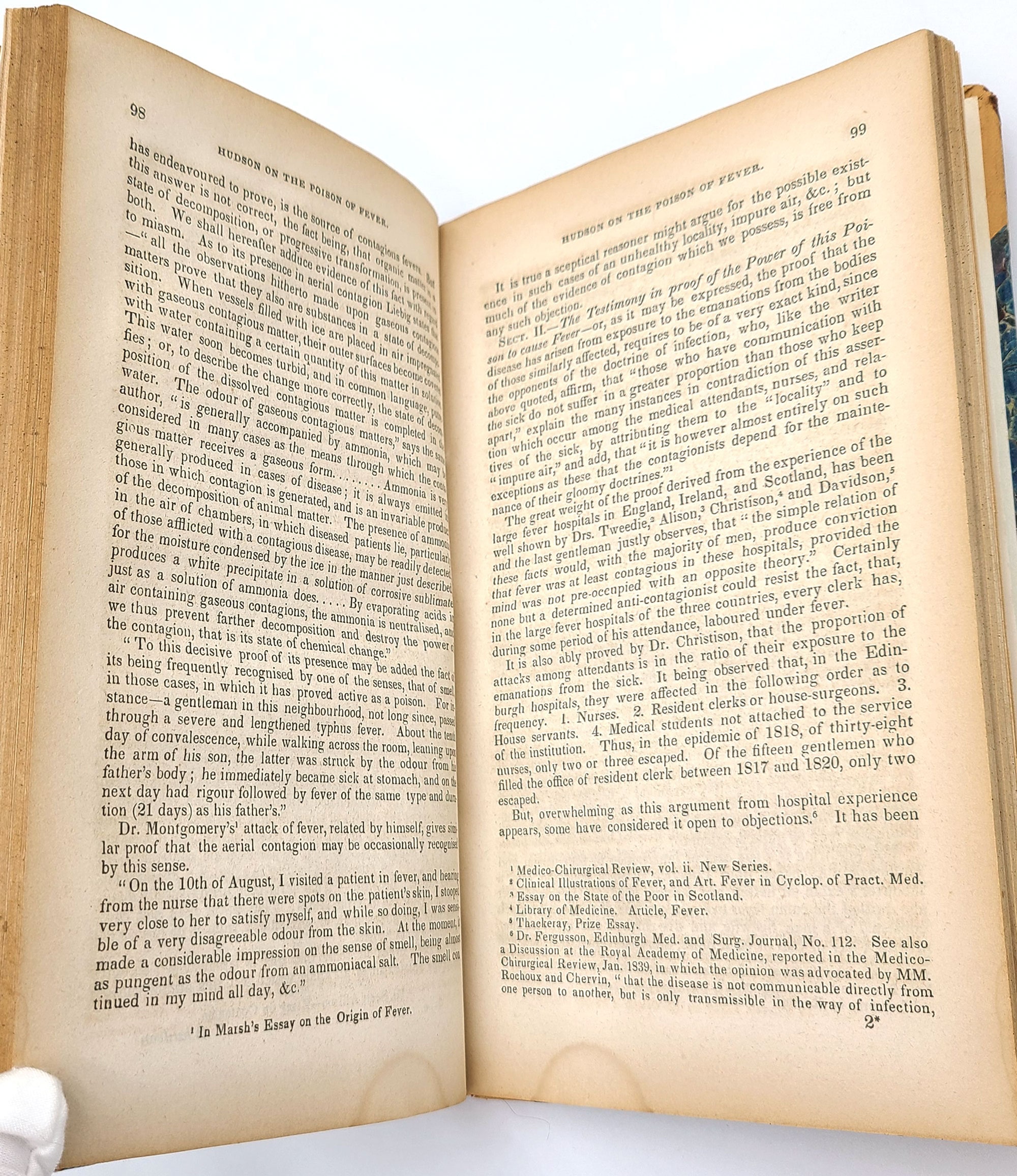 Title: Essays on the Sources and Mode of Action of Fever

Two works on the causes and treatment of fever in Great Britain and Ireland, primarily but not limited to typhus. Contains a wealth of specific historical and clinical detail.

[I] Thackeray Prize Essay - Essay on the Sources and Mode of Propagation of the Continued Fevers of Great Britain and Ireland. William Davidson, M. D. (d. 1859), Senior Physician to the Glasgow Royal Infirmary; Lecturer on Materia Medica at Portland Street Medical School, Glasgow, 1830-40.
[II] An Inquiry into the Sources and Mode of Action of the Poison of Fever. Alfred Hudson, M.B., T.C.D. (1808-1880), Physician to the Navan Fever Hospital (Ireland), President of the Royal College of Physicians of Ireland (1871-1873). In 1878 he was appointed Physician in Ordinary to the Queen in Ireland.

Previous owner's name on rear flyleaf: ''J. E. Sanborn / Medford / 1852''. Dr. John Eastman Sanborn (1824-1903) earned his M.D. at Harvard in 1850 and began his practice at Medford, Massachusetts. In the early 1850s he moved west and taught at the Medical College of the University of Iowa at Keokuk, but by 1857 was practicing medicine in the small prairie town of Epworth. In 1862 he mustered in as staff surgeon of the 27th Iowa Volunteer Infantry and in 1865 mustered out as surgeon-in-chief of the 16th Army Corps and the Army of the Cumberland. Following the war he took his practice to Rockport, Massachusetts. The Civil War letters of this pioneer surgeon are held in Louisiana State University's Special Collections.