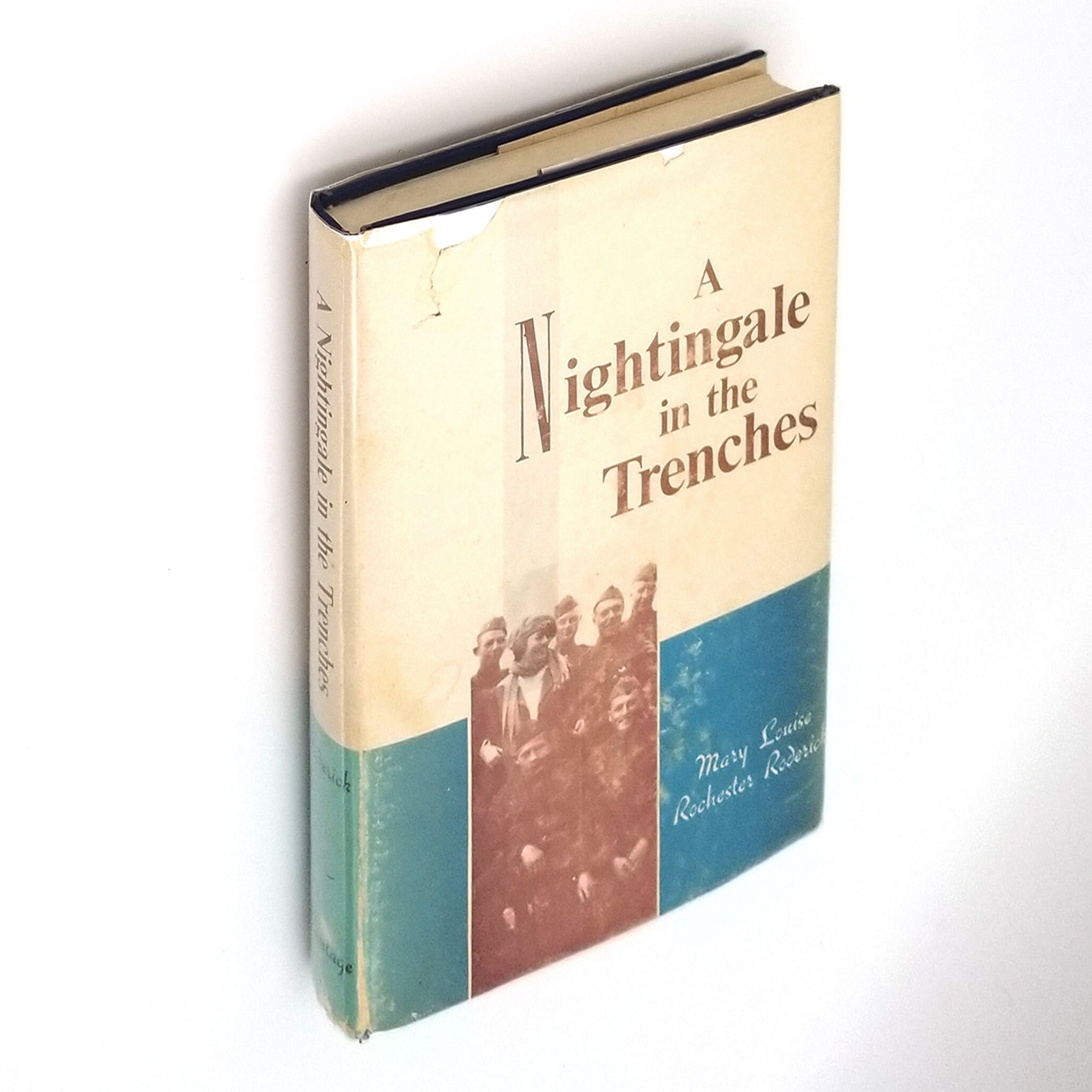 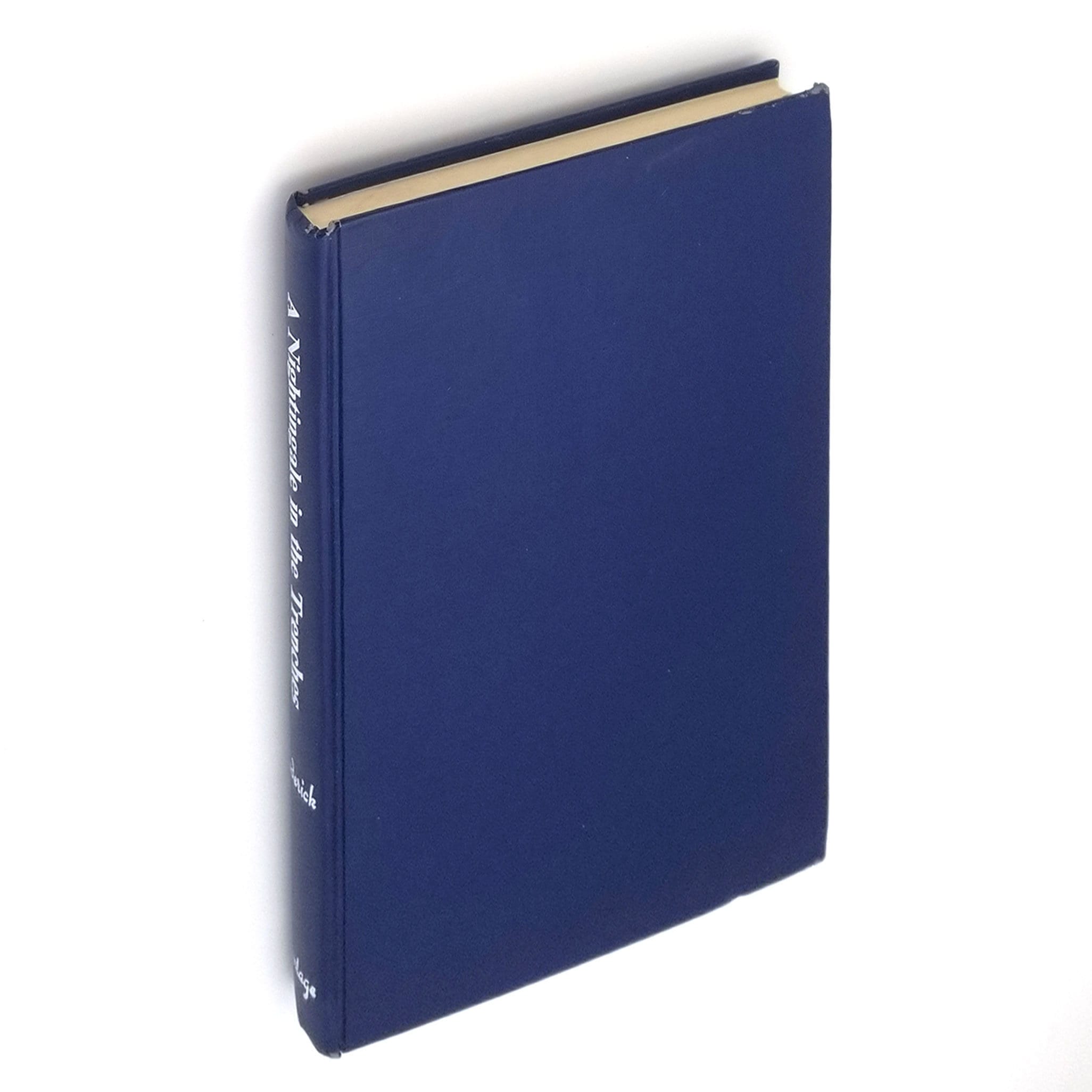 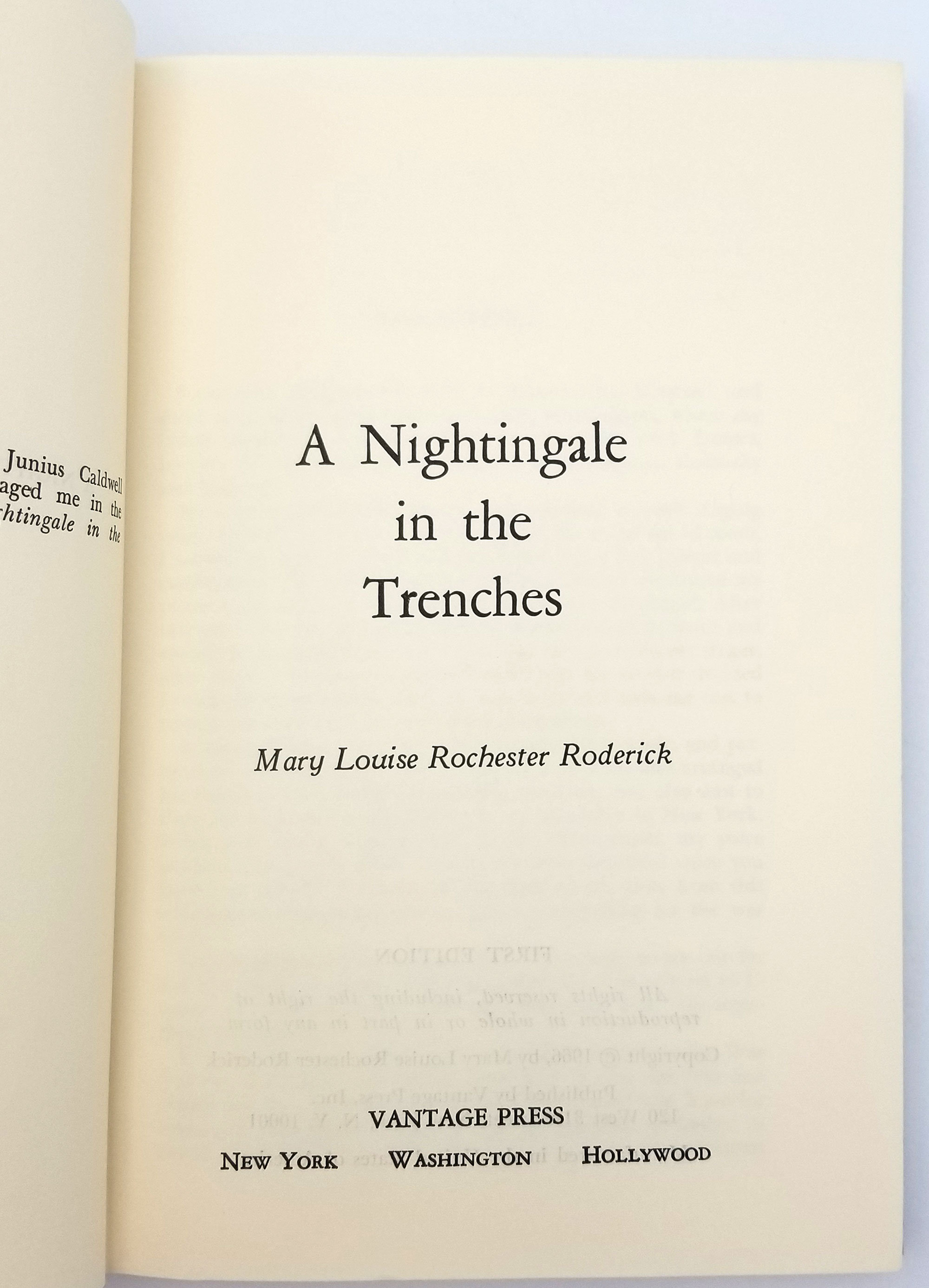 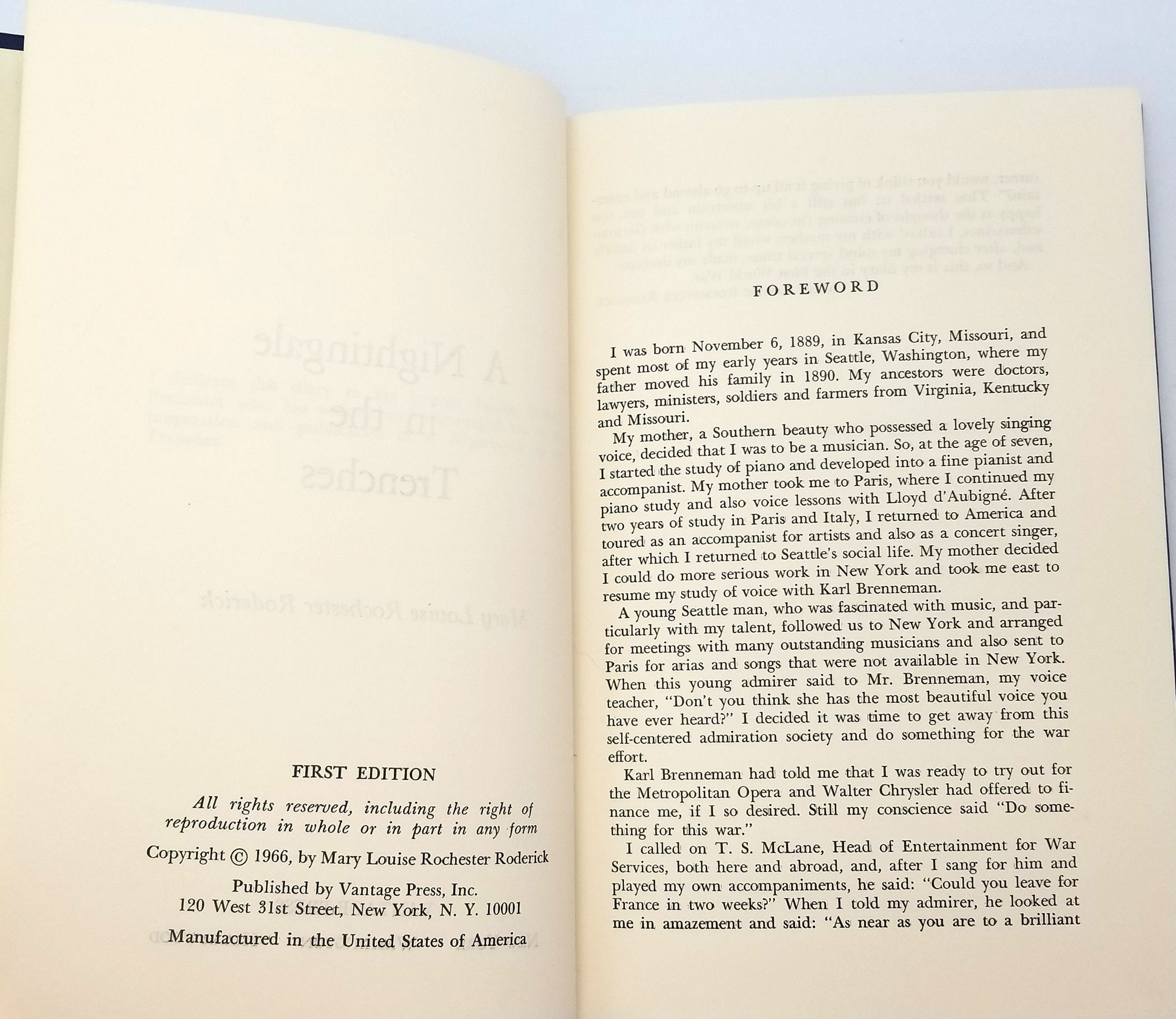 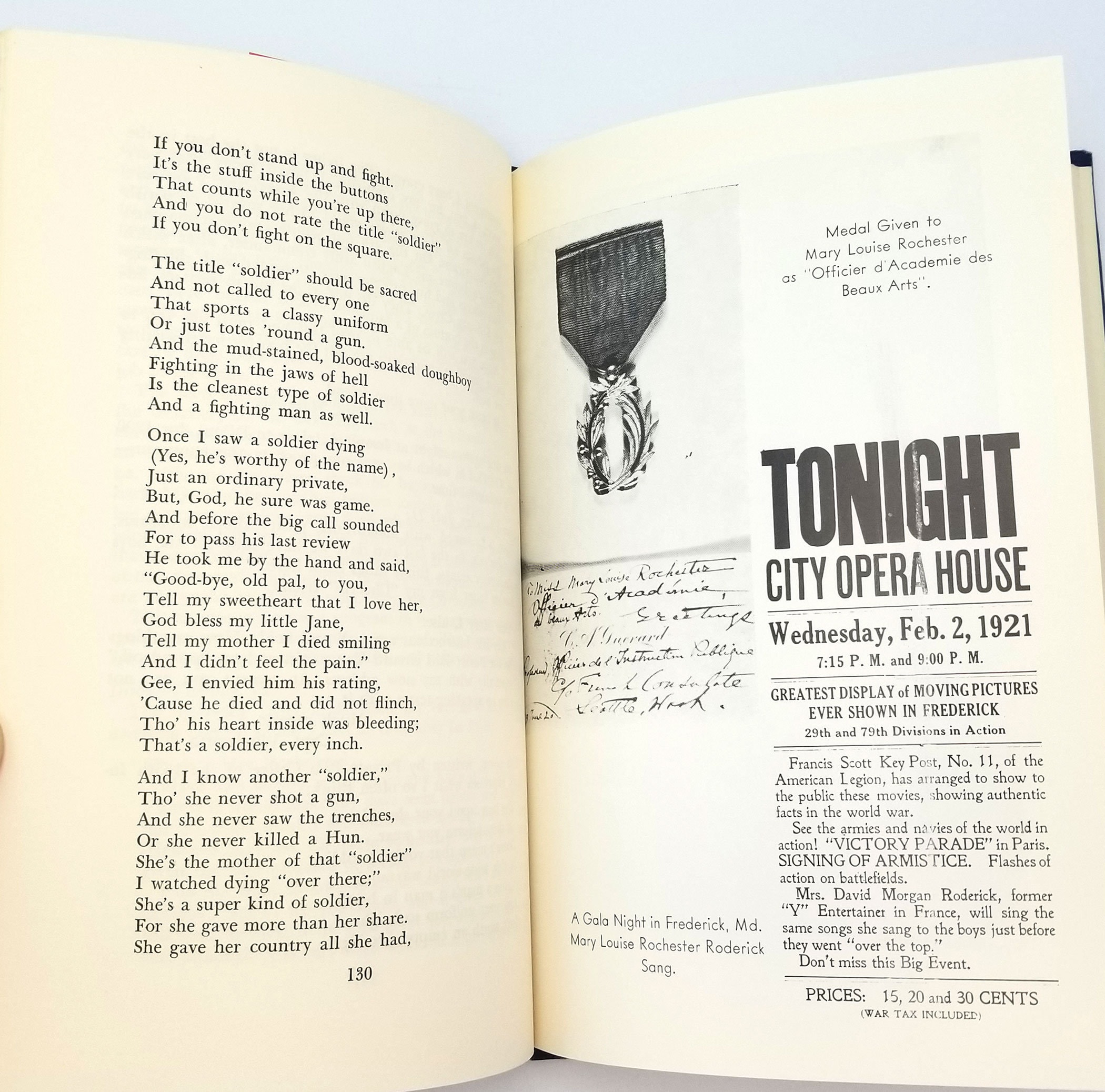 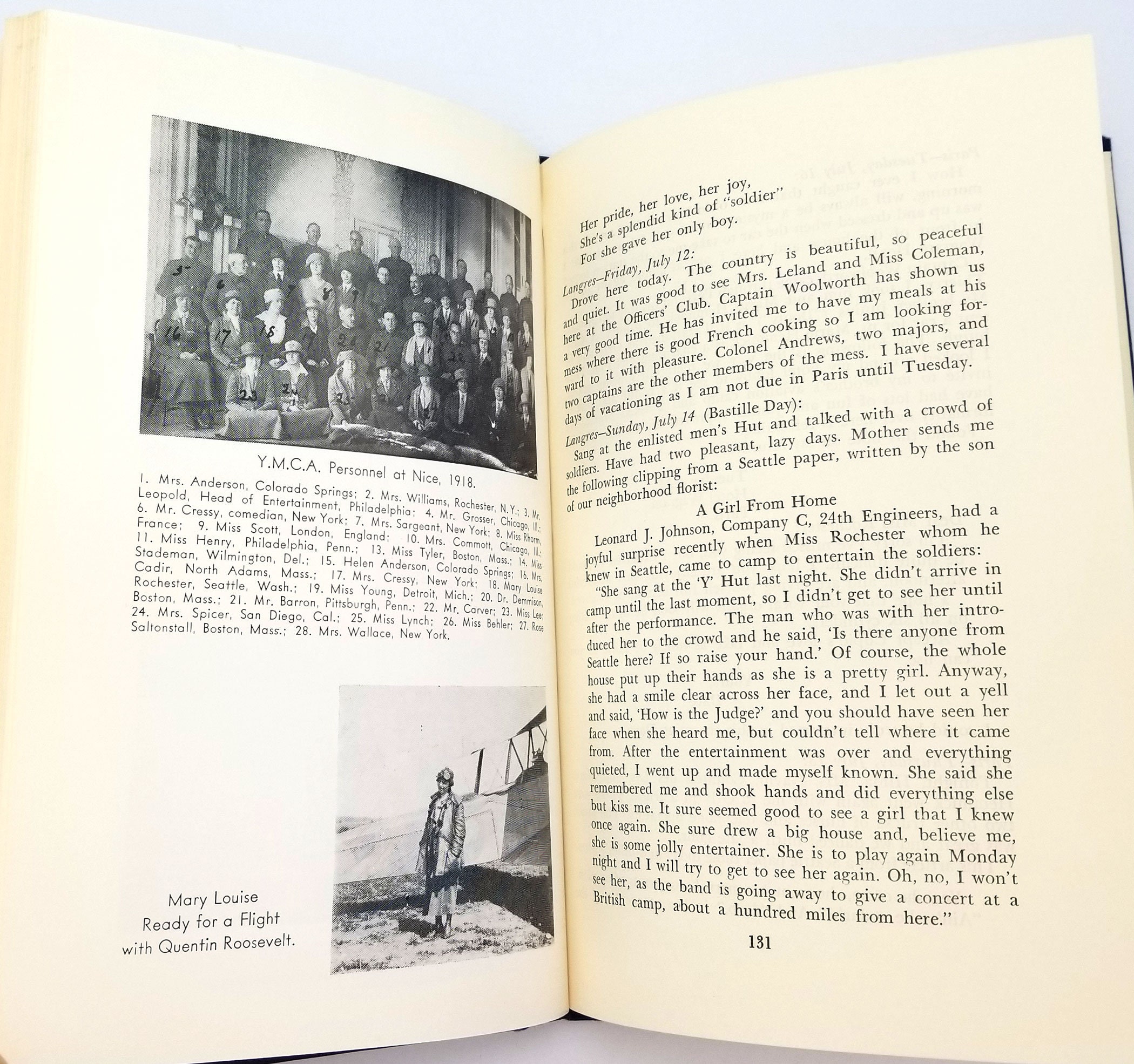 Title: A Nightingale in the Trenches

Description: Stated First Edition. Blue cloth boards with silver lettering on spine. Previous owner's bookplate on ffep. Pages clean. (Page 55 has a printers error where some of the text is missing and the bottom corner is clipped. A slip with the missing text has been laid in.) Dust jacket has a couple chips along the top edge of the front panel; rubbed; some spotting and soiling; not price clipped. DJ in clear archival sleeve. Eight plates showing 16 photographs. 289 pp. 8.25 x 5.5 inches.

Mary Louise (nee Rochester) Roderick (1889-1970) had been a young, gifted singer and pianist. In 1918, with her brothers already in the Army, she signed with the YMCA National War Work Council and was assigned as an entertainer for the troops. She sang for U.S. and Allied troops in front-line trenches, field hospitals, at camps, in YMCA huts, in tents, in open fields, in shattered French villages, and at such famed battlegrounds as Chateau-Thierry and Verdun.

This is the authors' chronological recollections between February 1918 and July 1919, recounting her experiences in France and, after the war, occupied Germany. Her narrative is also told through quite a bit of correspondence she received. She had contact with General John J. Perishing, Marshal (and later Prime Minister) Philippe Petain, and many other notables during time in Europe. For her service the French government made her an Officier des Beaux Arts of Paris.

Bookplate for Junius Rochester on ffep. The author dedicated her book to her brother Junius Caldwell Rochester. He himself was a First Lieutenant and squadron leader of the 464th Aero Squadron in France during WWI. They also had a nephew named Junius Rochester, a local Seattle historian. Best guess is that this was his copy.