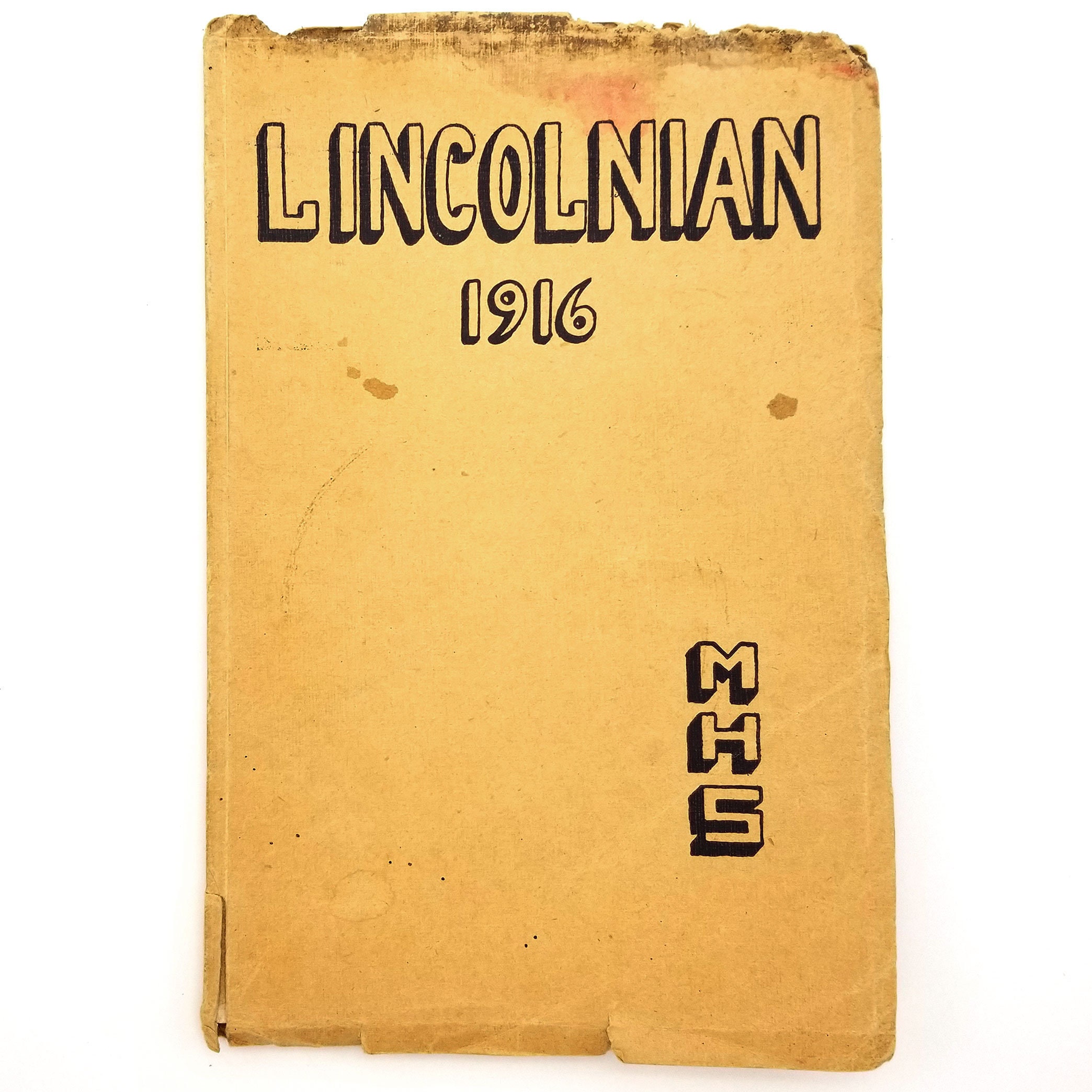 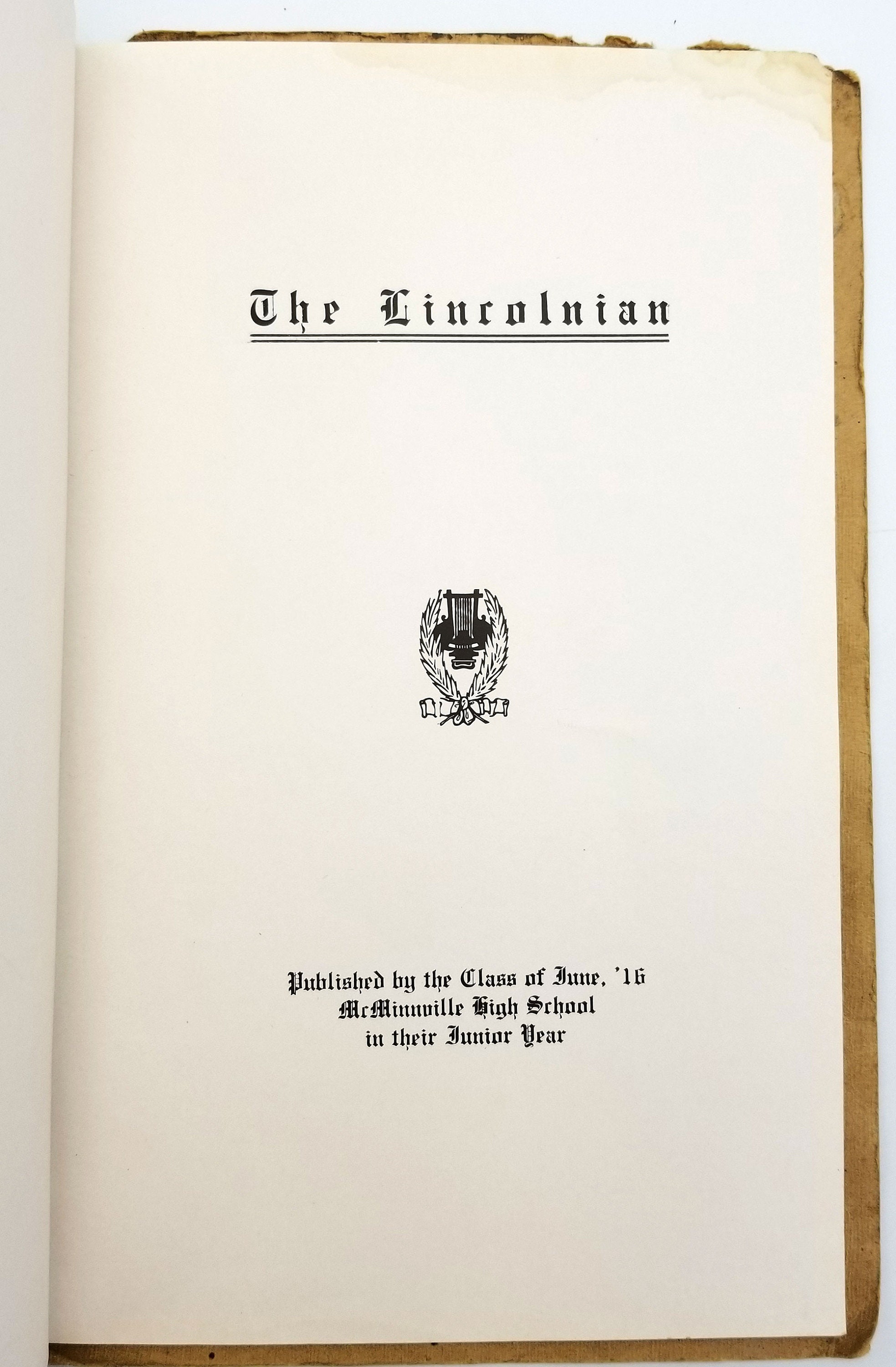 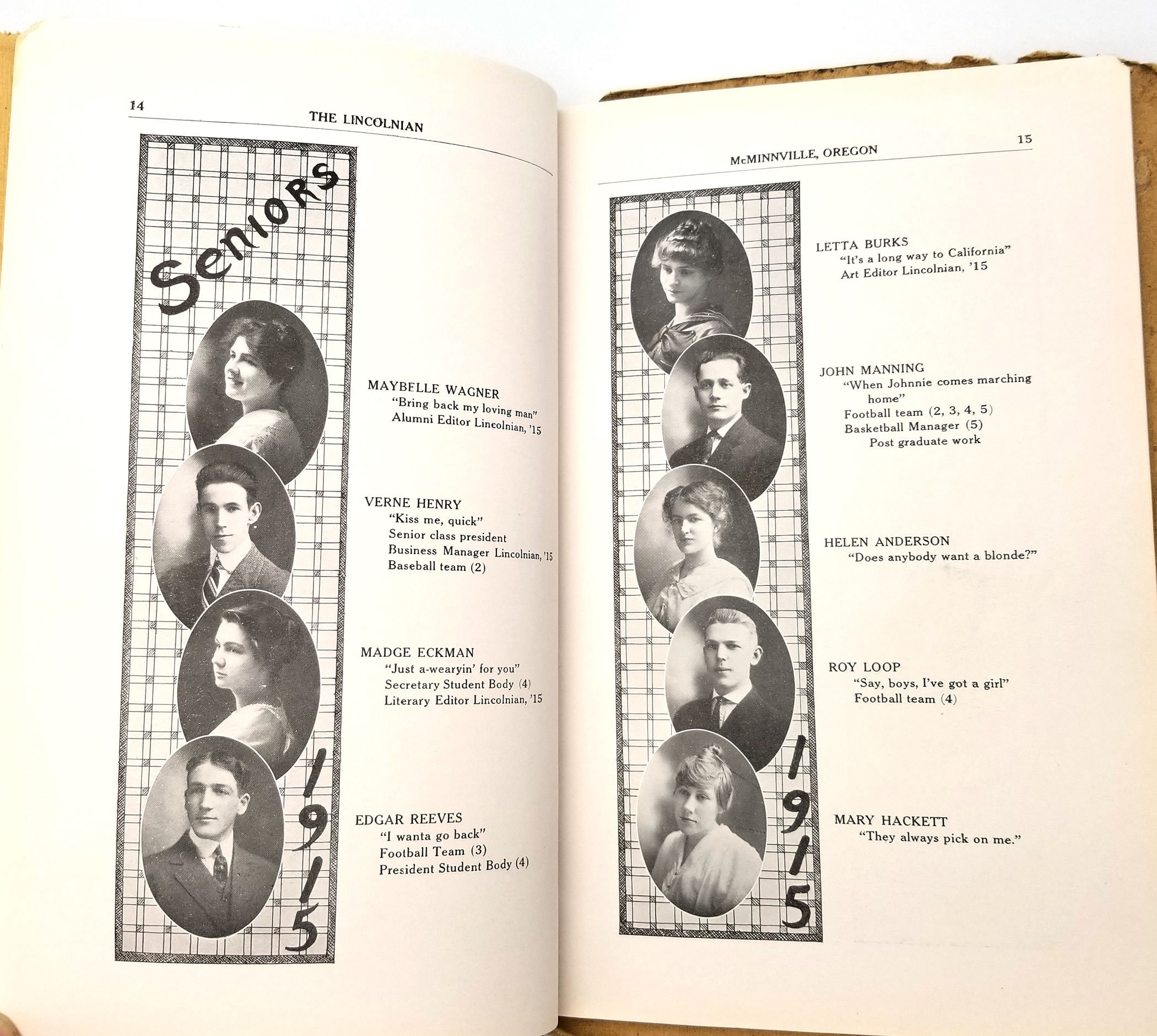 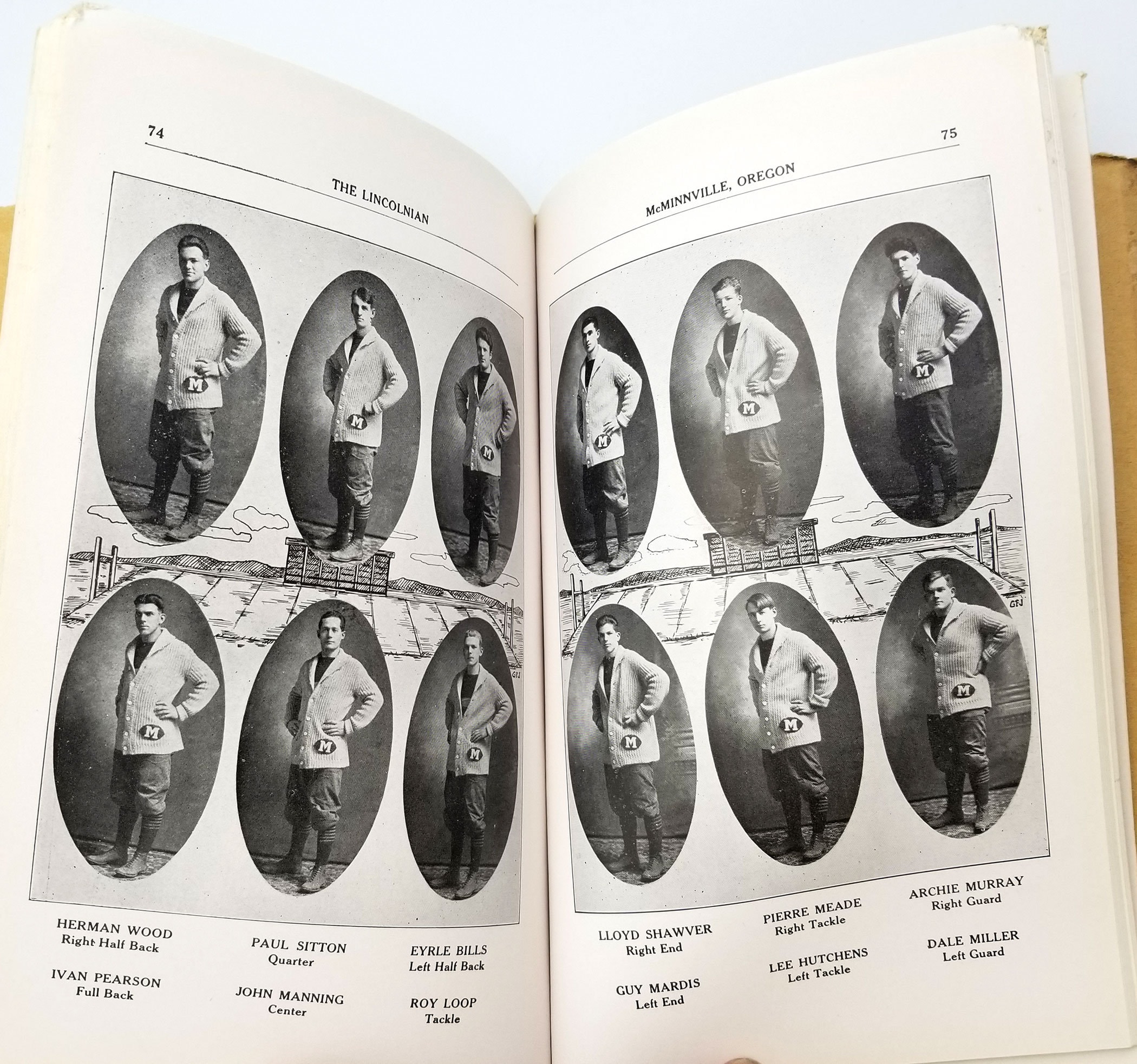 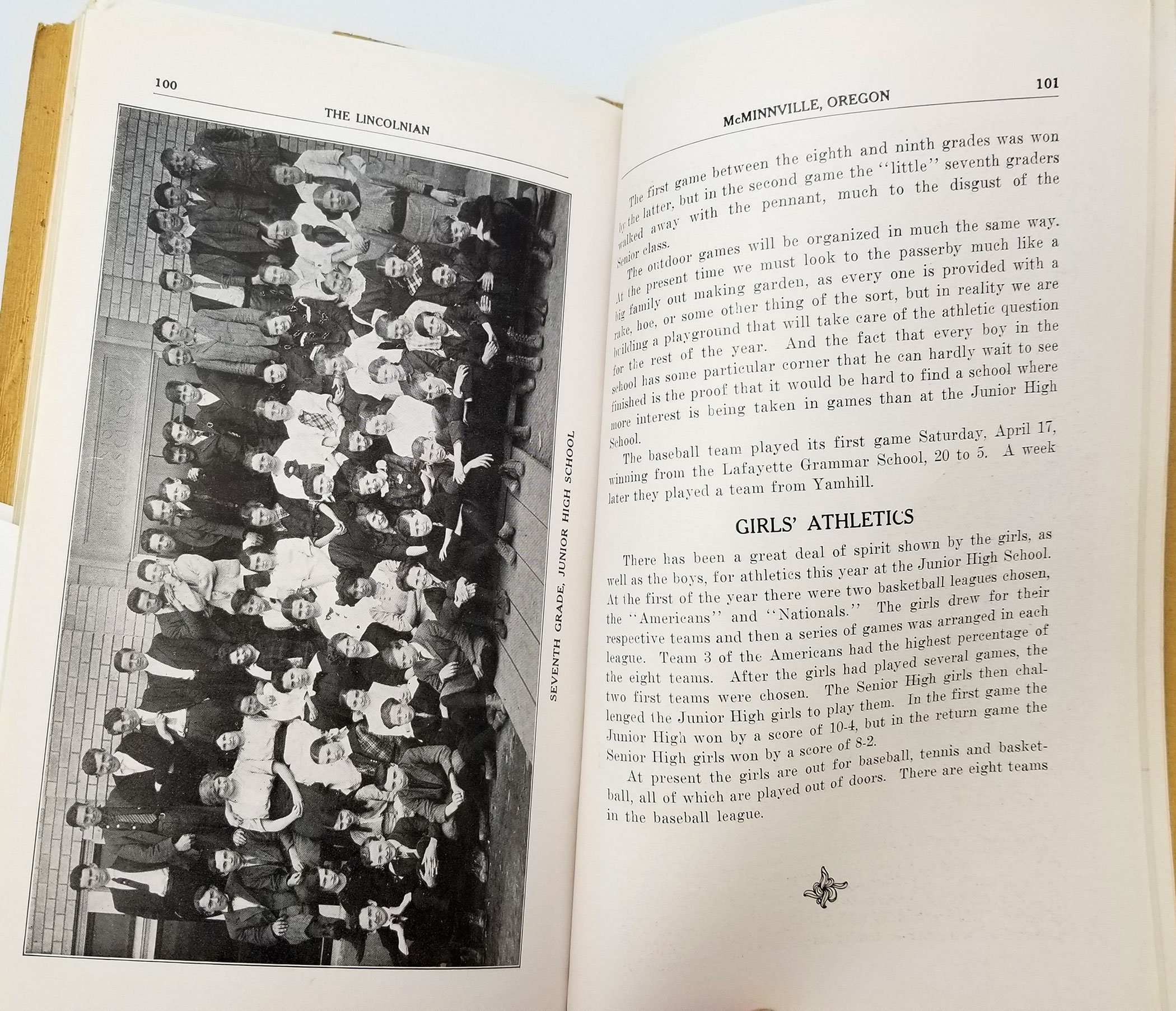 Description: Card covers. Covers show edgewear and front cover is heavily soiled along the top edge. The first few leaves have a very light dampstain along their top edge, else pages are clean throughout. 104, plus [14] pp. local advertising. 9.5 x 6 inches.

Includes identified individual portraits of the senior class and a group photo of the junior class with a class roster. The faculty have individual portraits and there is a list of their names and subject taught, but without connecting the two. There are alumni lists for the classes of 1911, 1912, 1913 and 1914 which indicate the occupation or school these former students are currently in. There are three group photos (without name identification) for the McMinnville Junior High School students: the Ninth, Eighth, and Seventh grades. The six junior high school teachers have a group photo with name identification. Also included are group photos for the Girl's Glee Club and the Girl's Basketball team. The Boys Football and Basketball teams feature individual, named portraits.

One of the seven women who taught at McMinnville High School in 1916 was Inez Stark. In 1918 she married Dr. Alan L. Hart (Alberta Lucille Hart), one of the first female-to-male transgender persons to have a hysterectomy in the United States. The teachers' names aren't matched to their portraits, so we are not sure which of the seven women was Inez. According to secondary historical sources, the two separated in 1923 and divorced in 1925. (Hart went on to become a notable figure in the tuberculosis field and in x-ray medicine and also wrote several novels.) One of the other teachers was James Hugh Pruett, an author, instructor, and astronomer. He later taught at the University of Oregon and in 1932 was made the Pacific Northwest director of the American Meteor Society.