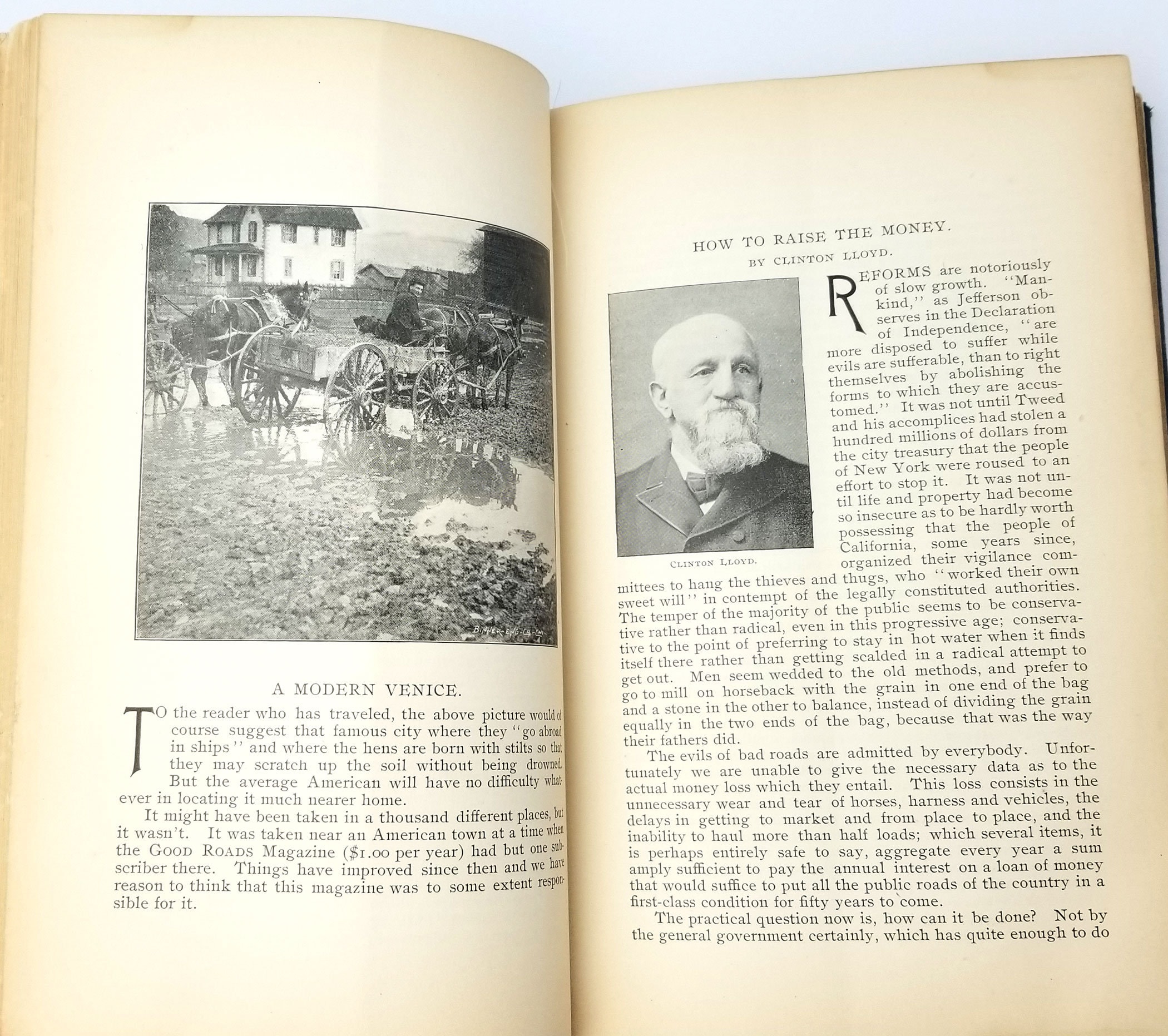 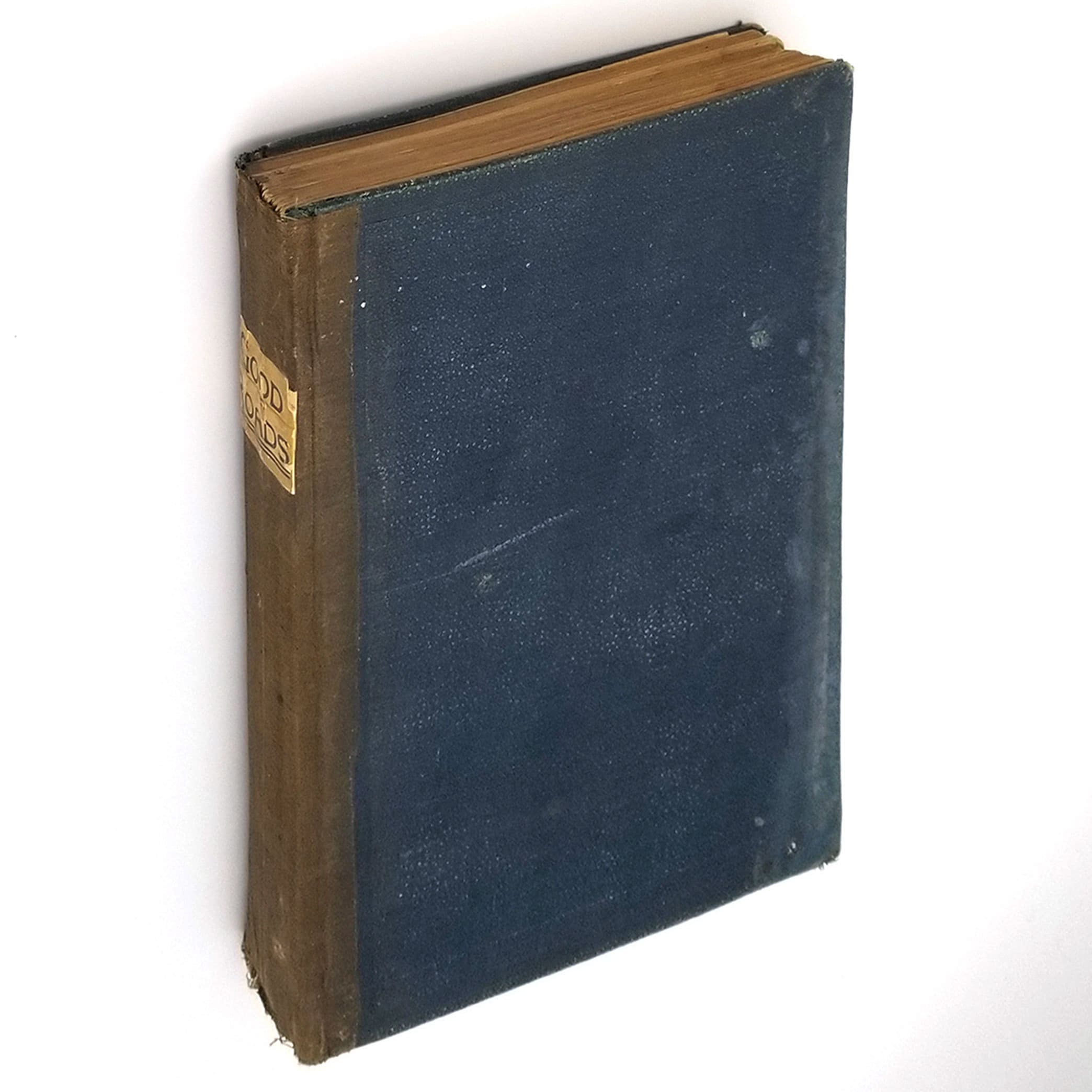 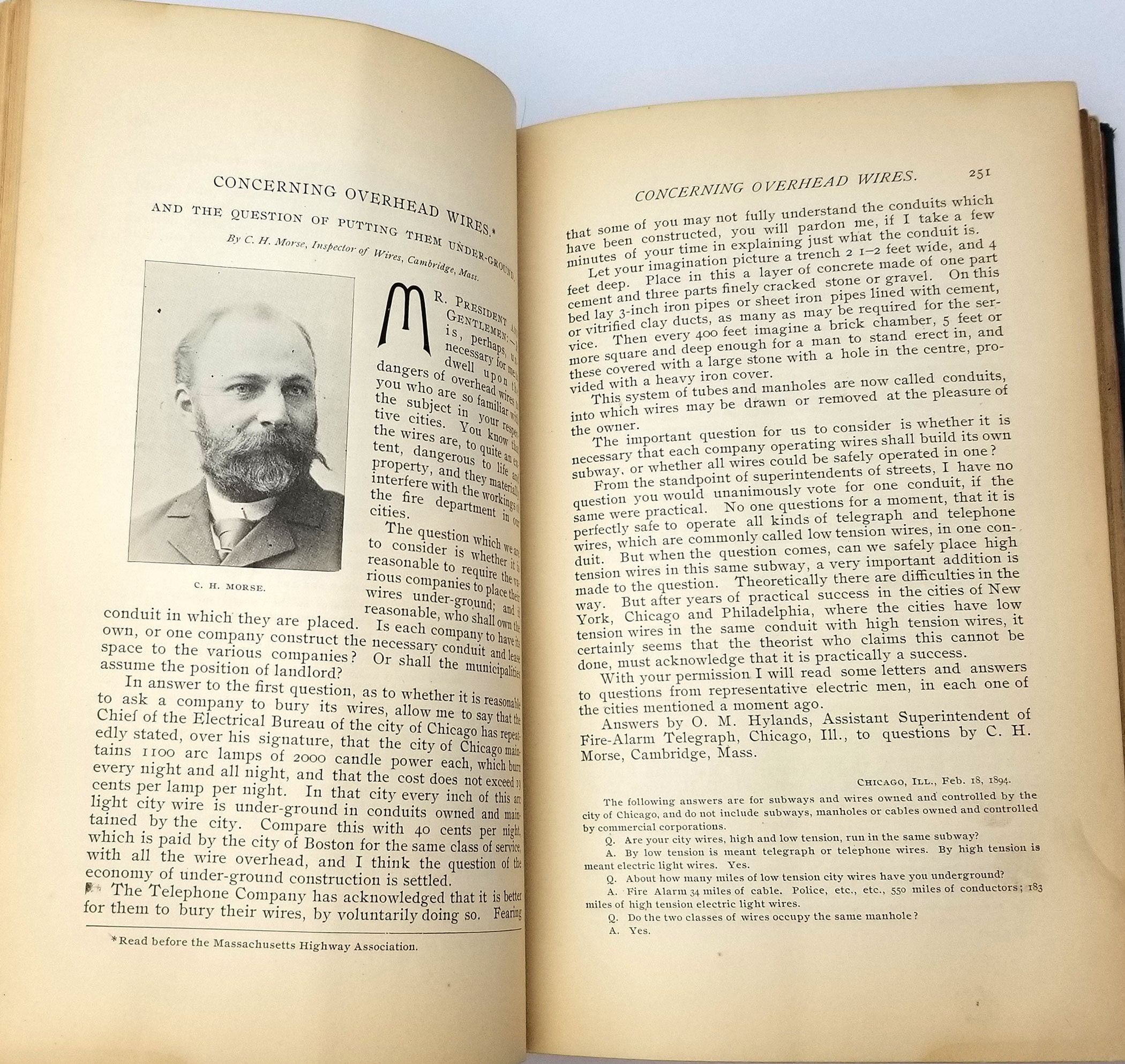 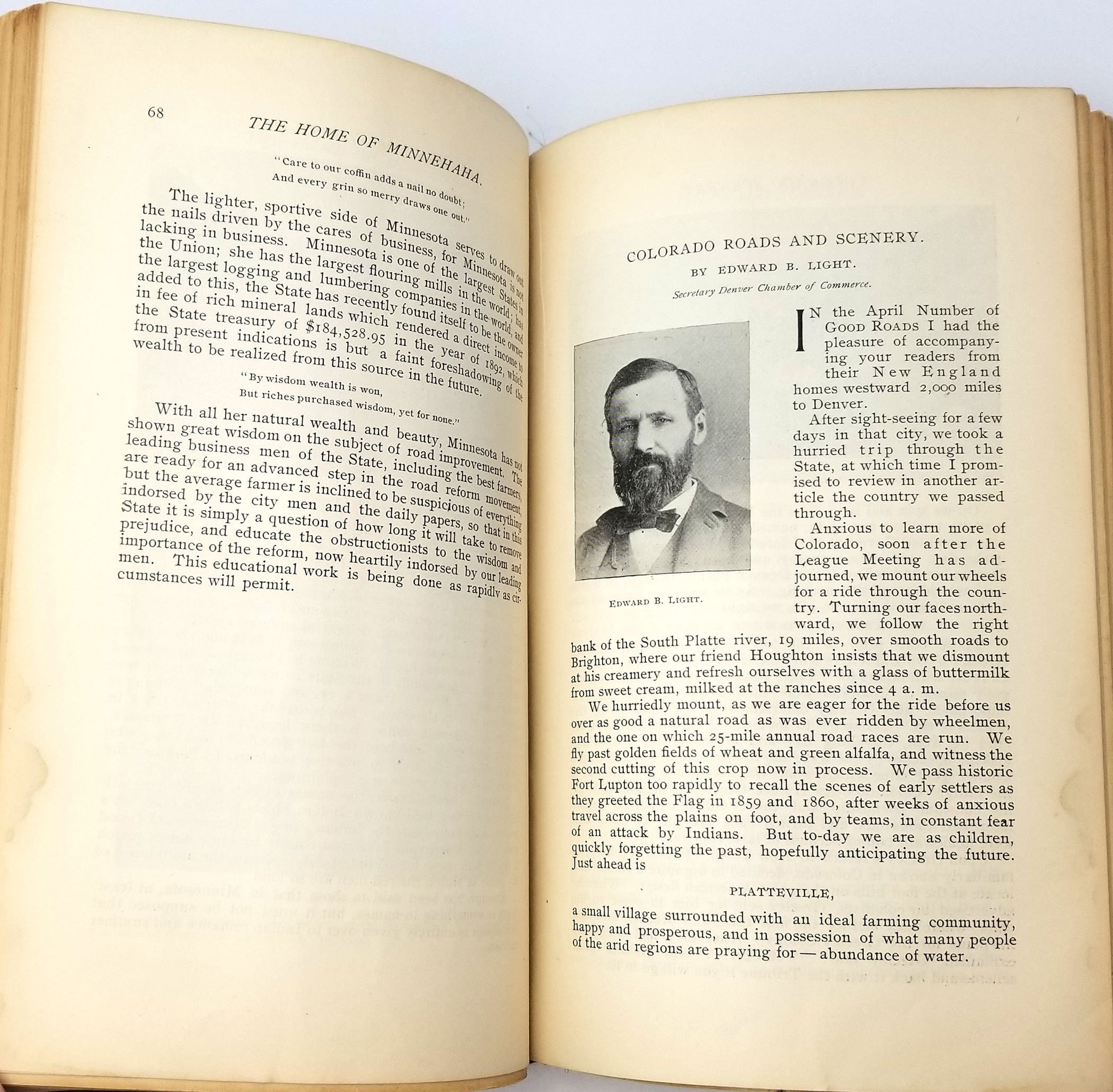 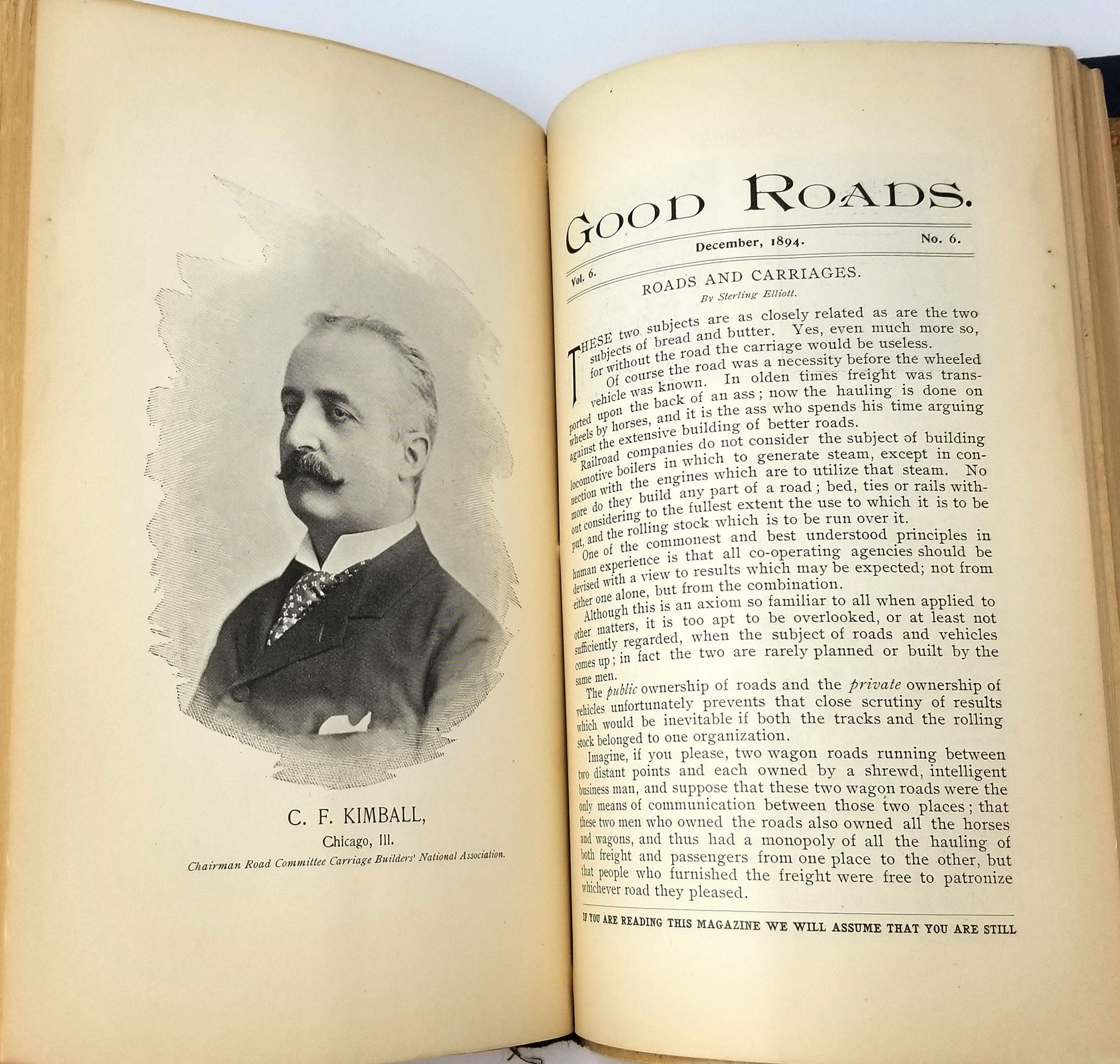 Description: A bound set of 12 consecutive issues of the monthly periodical Good Roads, published between April 1894 and March 1895. Non-professionally bound (without the original cover wraps) in boards that are somewhat worn and soiled. Illustrated. 695 pages. 9 x 6 inches.

Good Roads was a periodical published by the League of American Wheelman (LAW) and devoted to the cause of public road improvement (for the benefit of bicyclists, horsemen, wagon drivers, and pedestrians). The publication run of Good Roads lasted for about ten years. The first issue was produced in January 1892 and the League disbanded in 1902. Their mantle was then picked up by the newly established American Automobile Association (AAA).

Some of the article titles: The Compressed Asphalt Block as a Pavement for Cities and Large Towns, On the Form and Location of Street Railroad Tracks, Concerning Overhead Wires and the Question of Putting Them Underground, What Street Improvements Have Done for Cincinnati, Colorado Roads and Scenery, Rural Free Mail Delivery, The History and Construction of Highways and Who Should Build Them, Montana from an Agricultural Standpoint, True History of the "Bloomer Costume" [women's lower-body garments], The Speed of Horses as Affected by the Condition of the Roads, Roads and Carriages, Macadam Roads on the Prairie, Iceland: a Country without Roads, Concerning a Limestone Road, Pneumatic vs. Steel Tires, Suggestions for Road Agitators, Some Hard Facts about Wide Tires, Convict Labor on Country Roads, Should Bicycles be Subject to a Special Tax, Will Good Roads Bankrupt Farmers?, Annual Report of the Massachusetts Highway Commission, Suburban Roads, A New Comfort for the Sick: the Pneumatic-Tired Ambulance as Used by New York Hospitals, A Trip to Kilauea, The Road Question in Ohio, Good Road Movement in California. The first issue in the set opens with an explanation and opinion on the recent vote do prevent Blacks from joining the LAW.