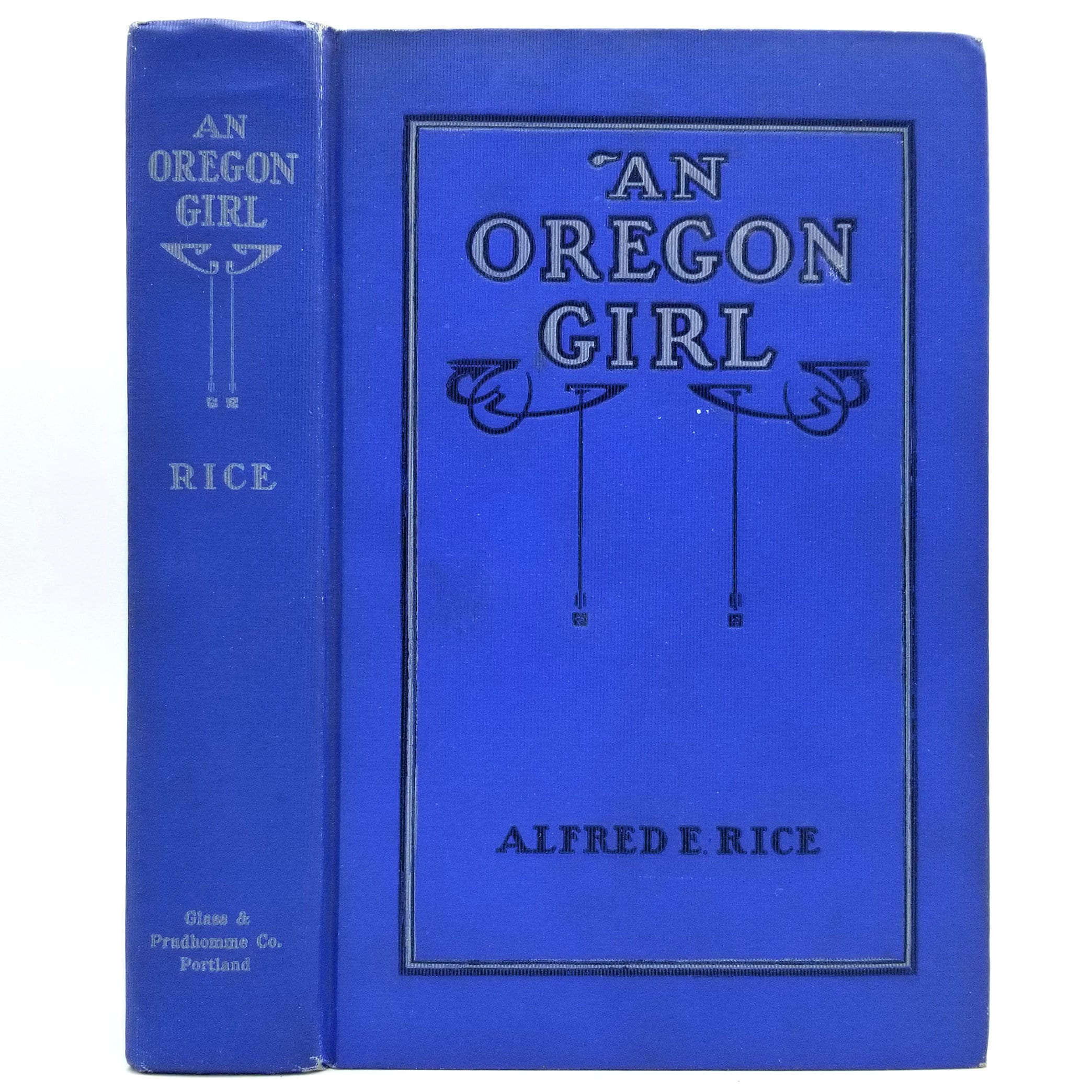 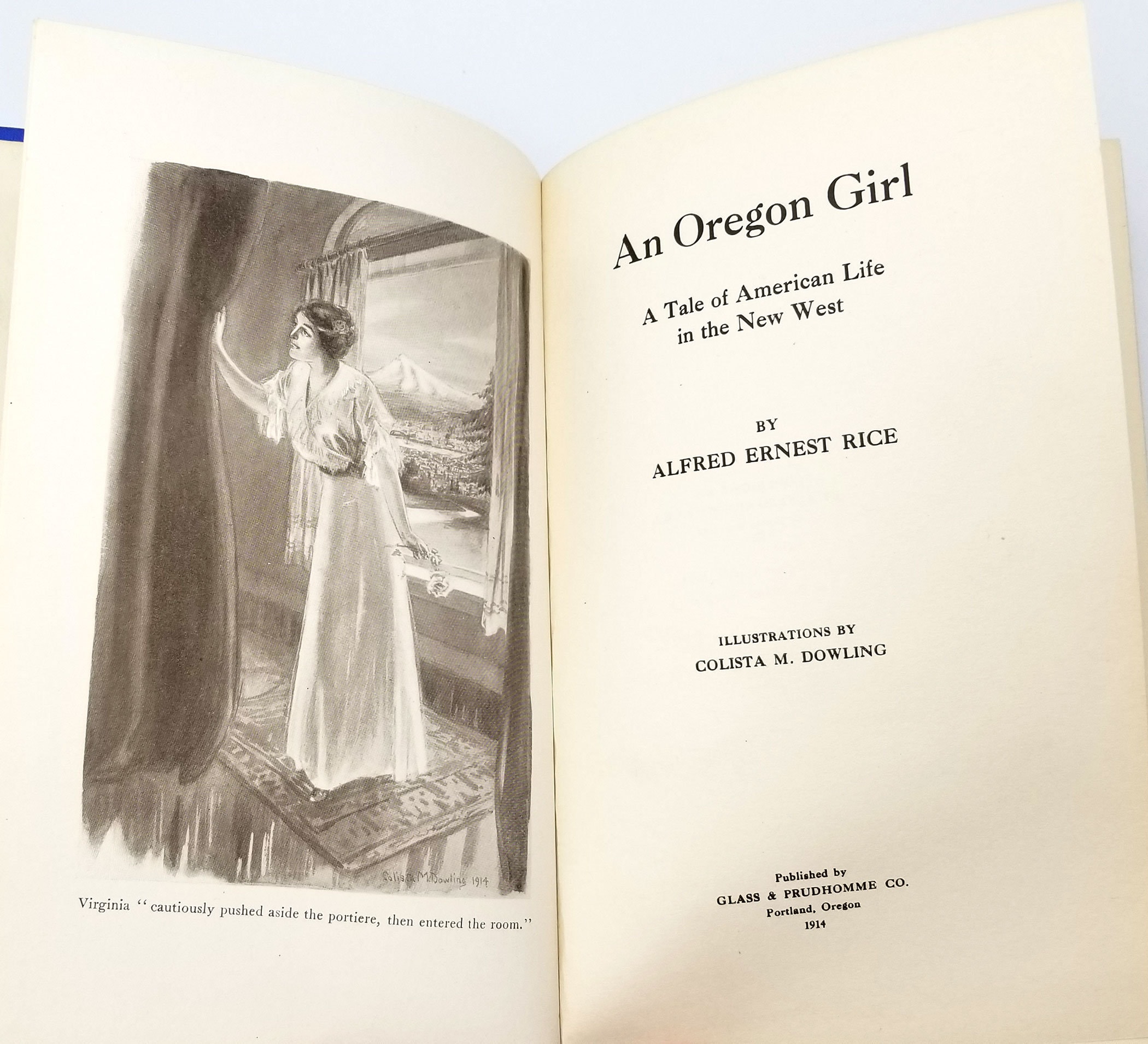 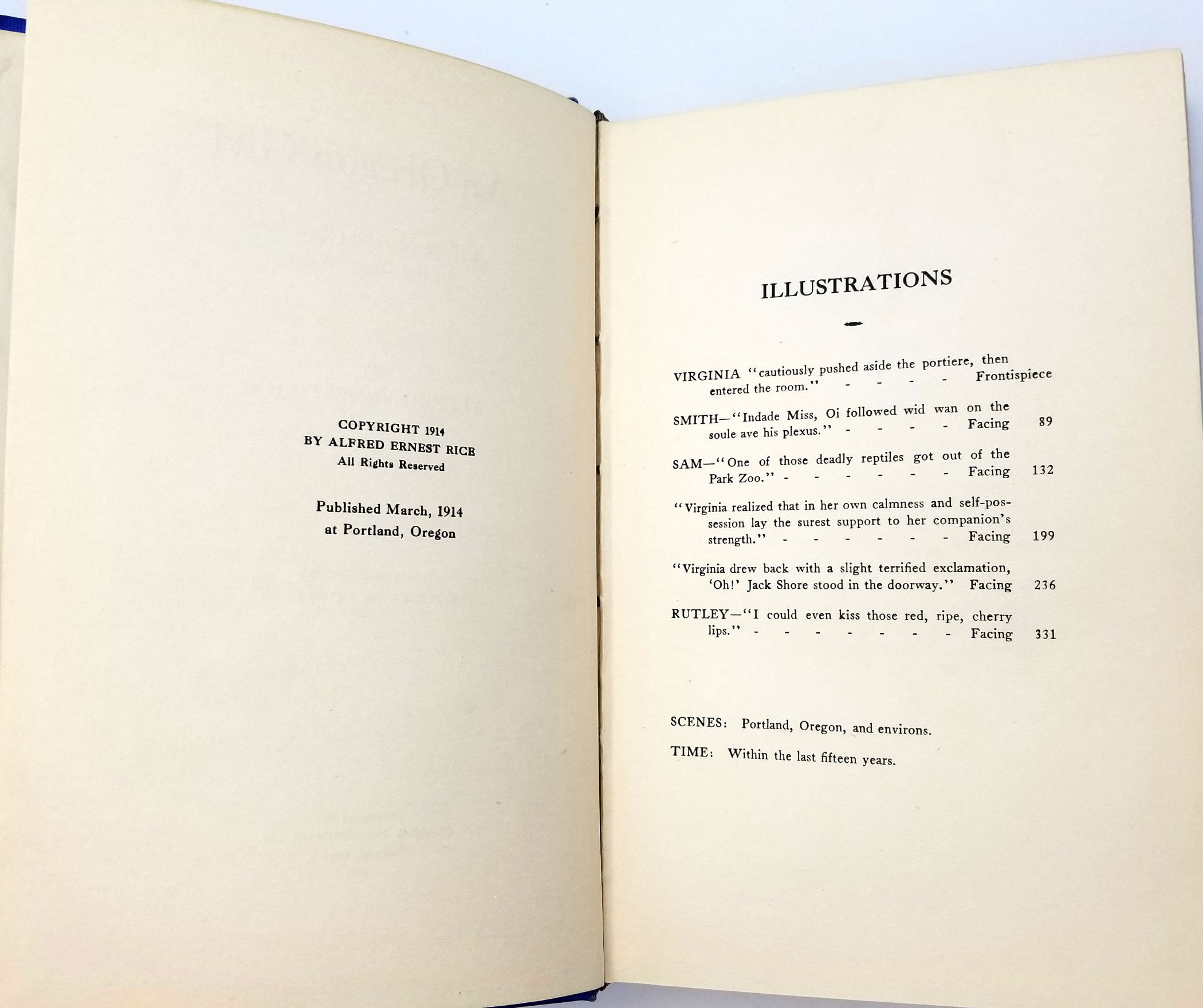 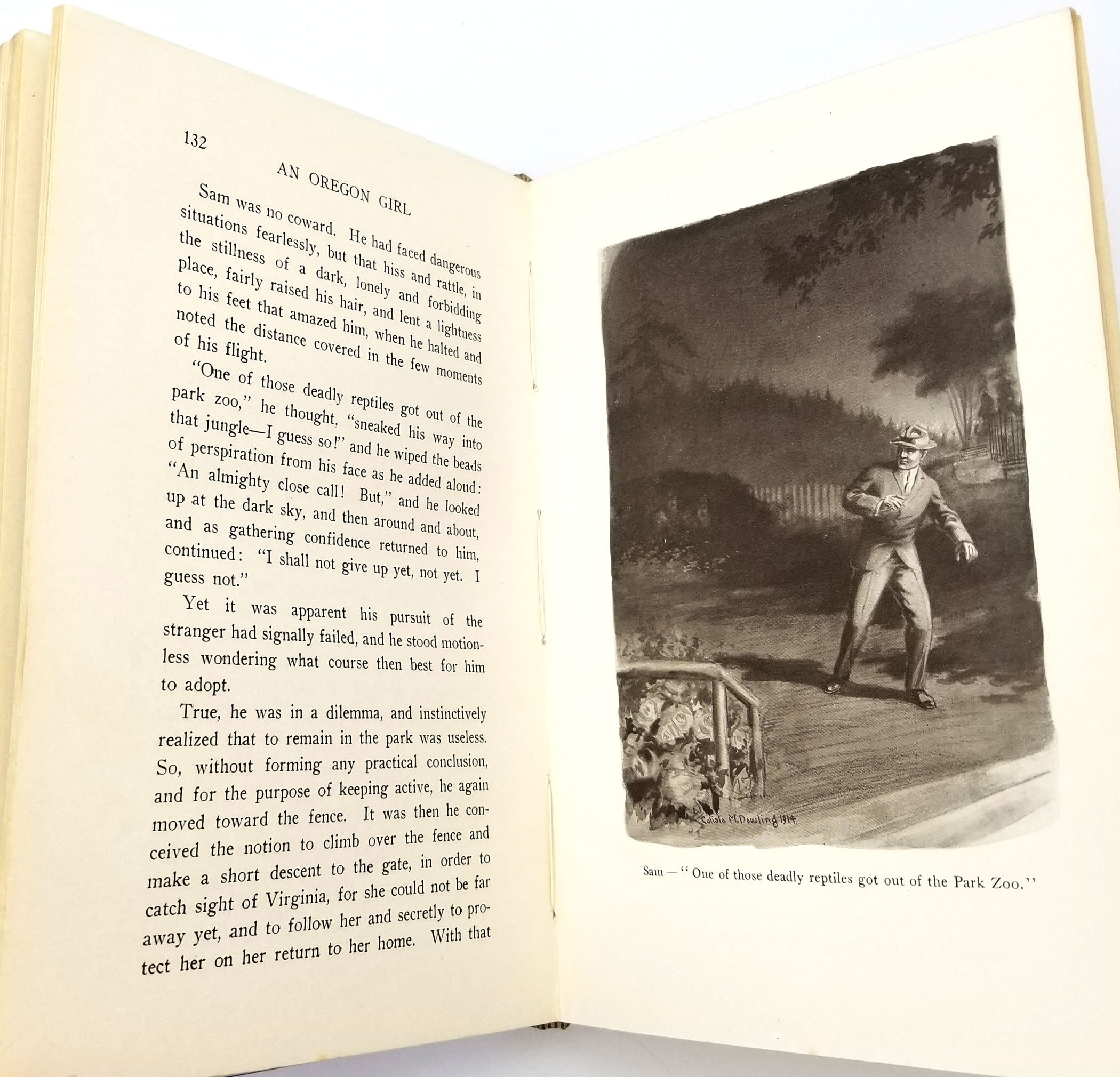 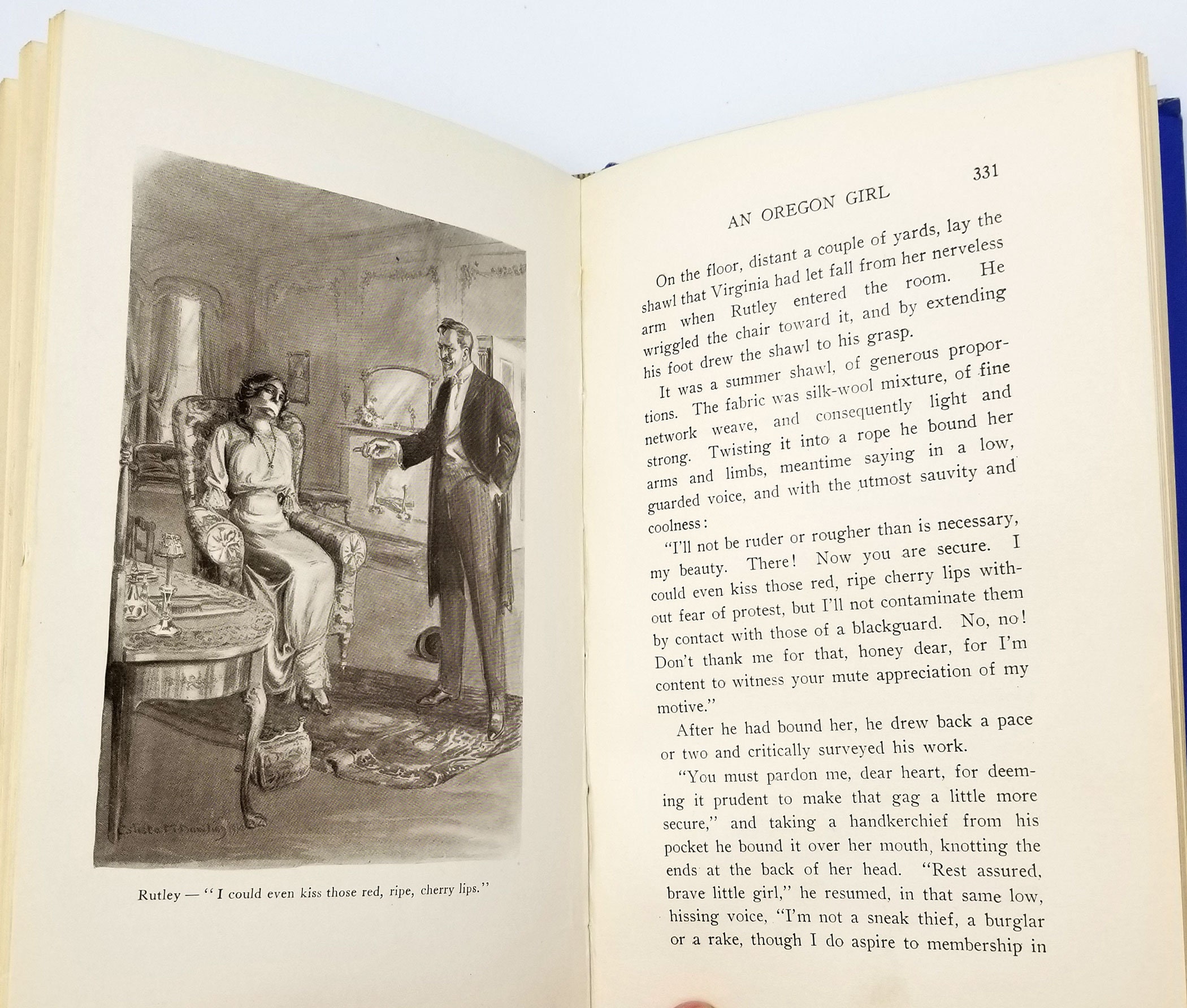 Title: An Oregon Girl: A Tale of American Life in the New West

Description: First Edition (March 1914). Blue boards stamped in black and gray. Light wear to edges and corners. Pages are generally clean and crisp. Some minor ink blots on page 99 that appear to be from the printer. Five illustrated plates (including frontispiece). [10], 362 pp. 7.75 x 5.25 inches.

A dramatic novel set in Portland, Oregon during the early years of the twentieth century (vaguely sometime between 1899 and 1914). It features fist fights, gunfights, a kidnapping, a hold up at Third and Jefferson, a conflict at Ross Island, queer midnight adventures at City Park, escaped animals at the zoo, a respectable citizen being shanghaied, and scenes of the Willamette and Columbia Rivers.

Alfred Ernest Rice (1851-1933) was born in England and immigrated to the United States when he was young. He lived in Portland, Oregon, between the mid-1890's and about 1927, when he moved to Newport on the Oregon coast. An Oregon Girl was his only published novel.

Colista Dowling (1881-1968) moved to Oregon in 1890 where she had a long career as a successful commercial artist. In January 1914, a few months before the publication of An Oregon Girl, she won the prize for best poster in the Rose Festival contest. She illustrated for The Pacific Monthly, served as the president of the Women's State Press Club, was a longtime member of the Oregon Society of Artists, and had her work exhibited at both the Portland and Seattle Art Musuems.