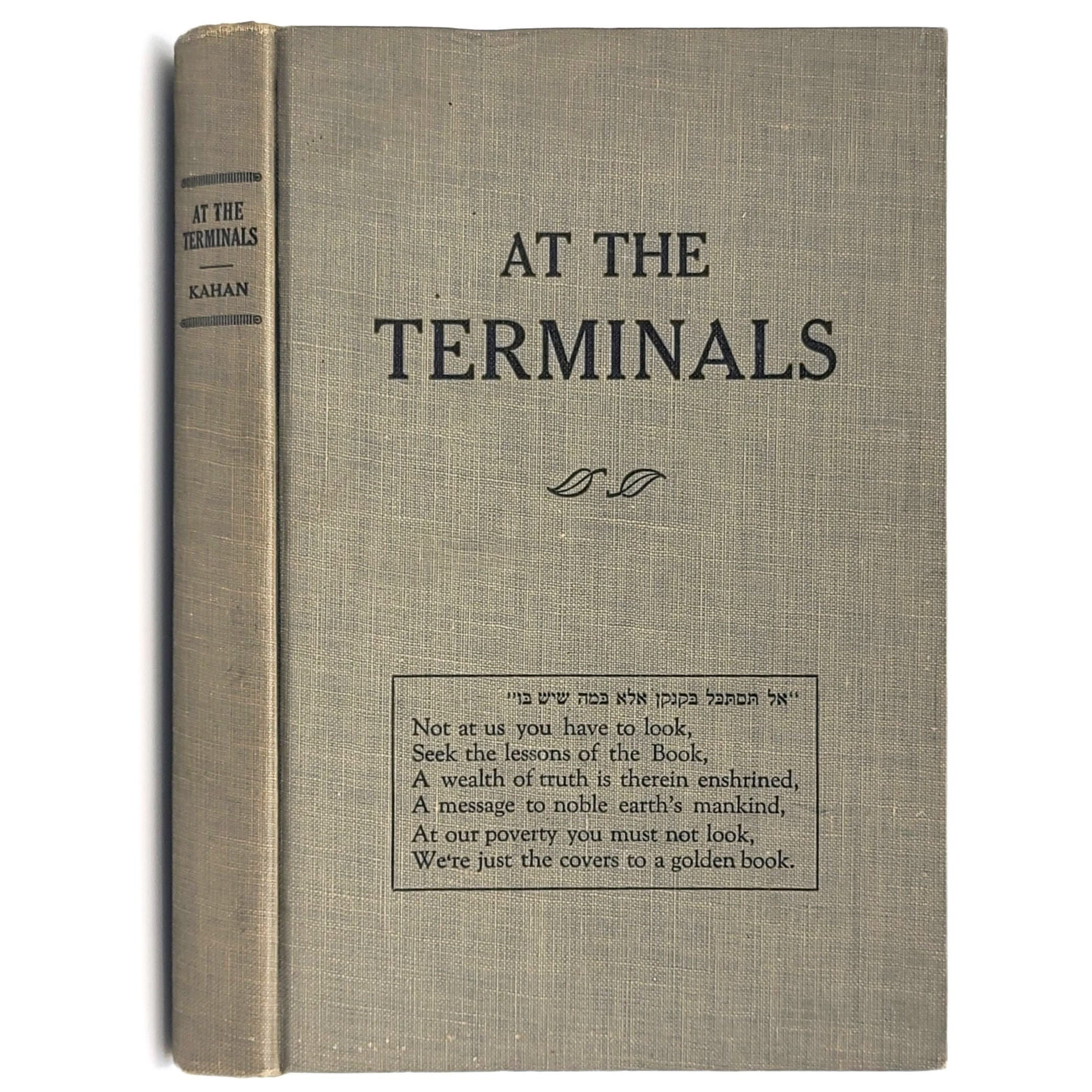 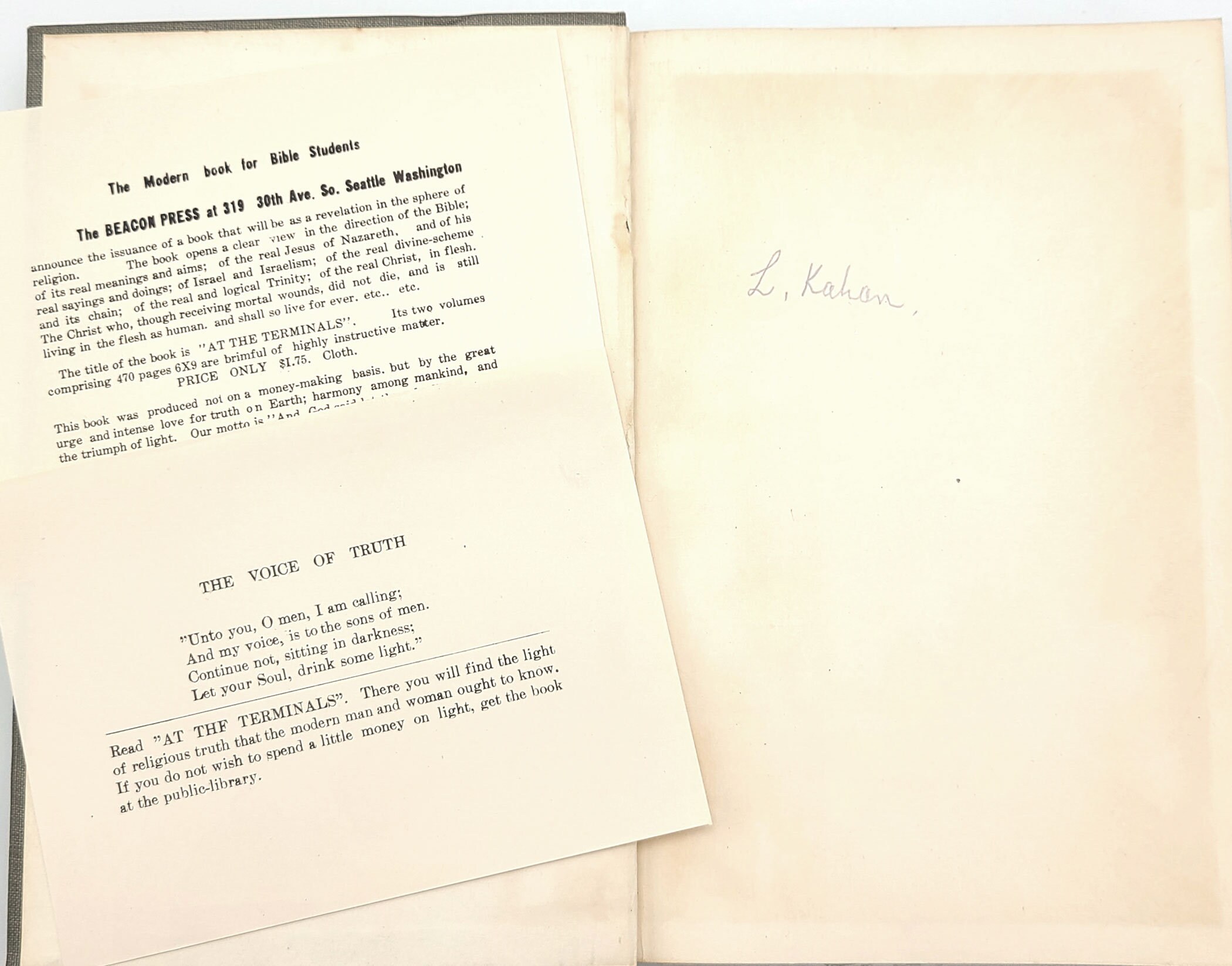 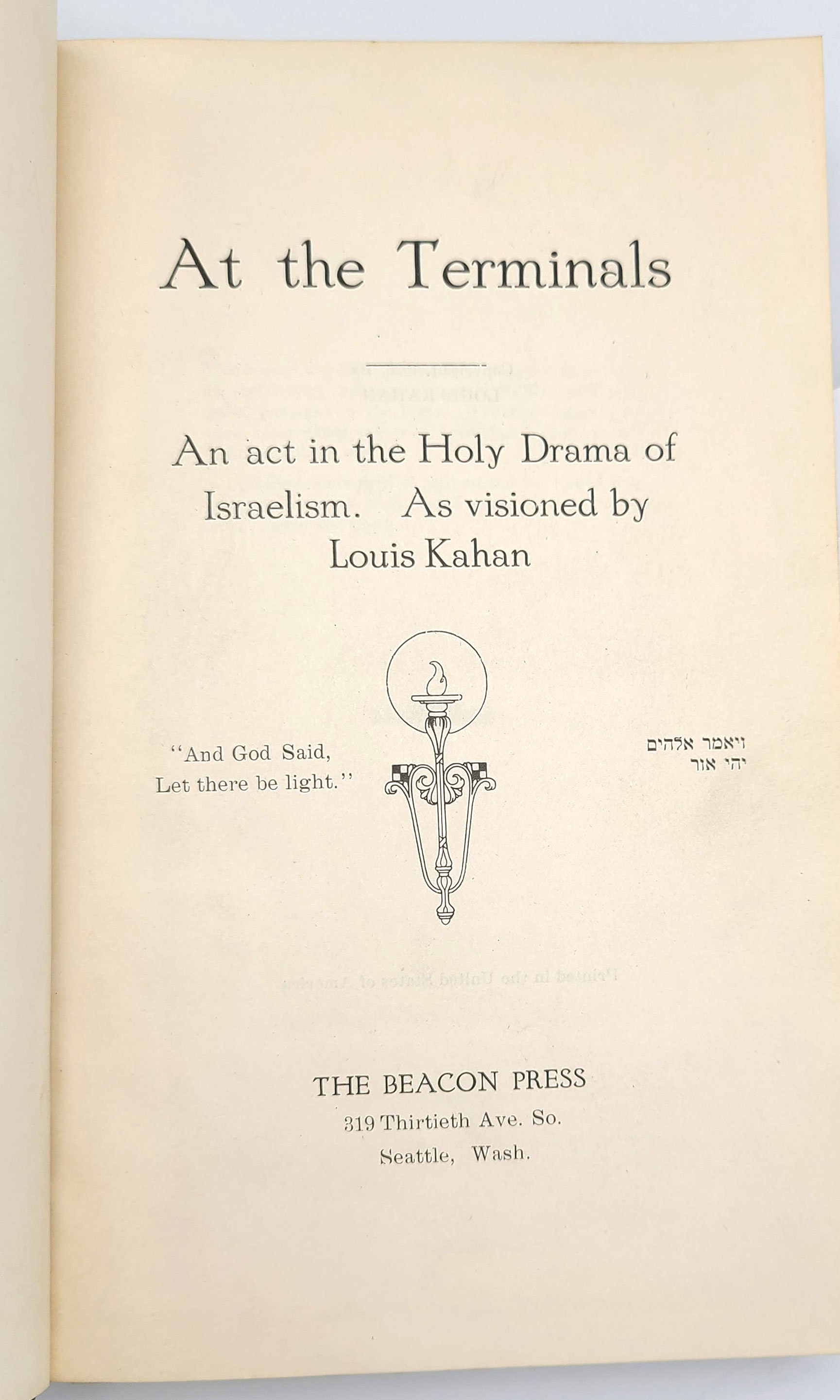 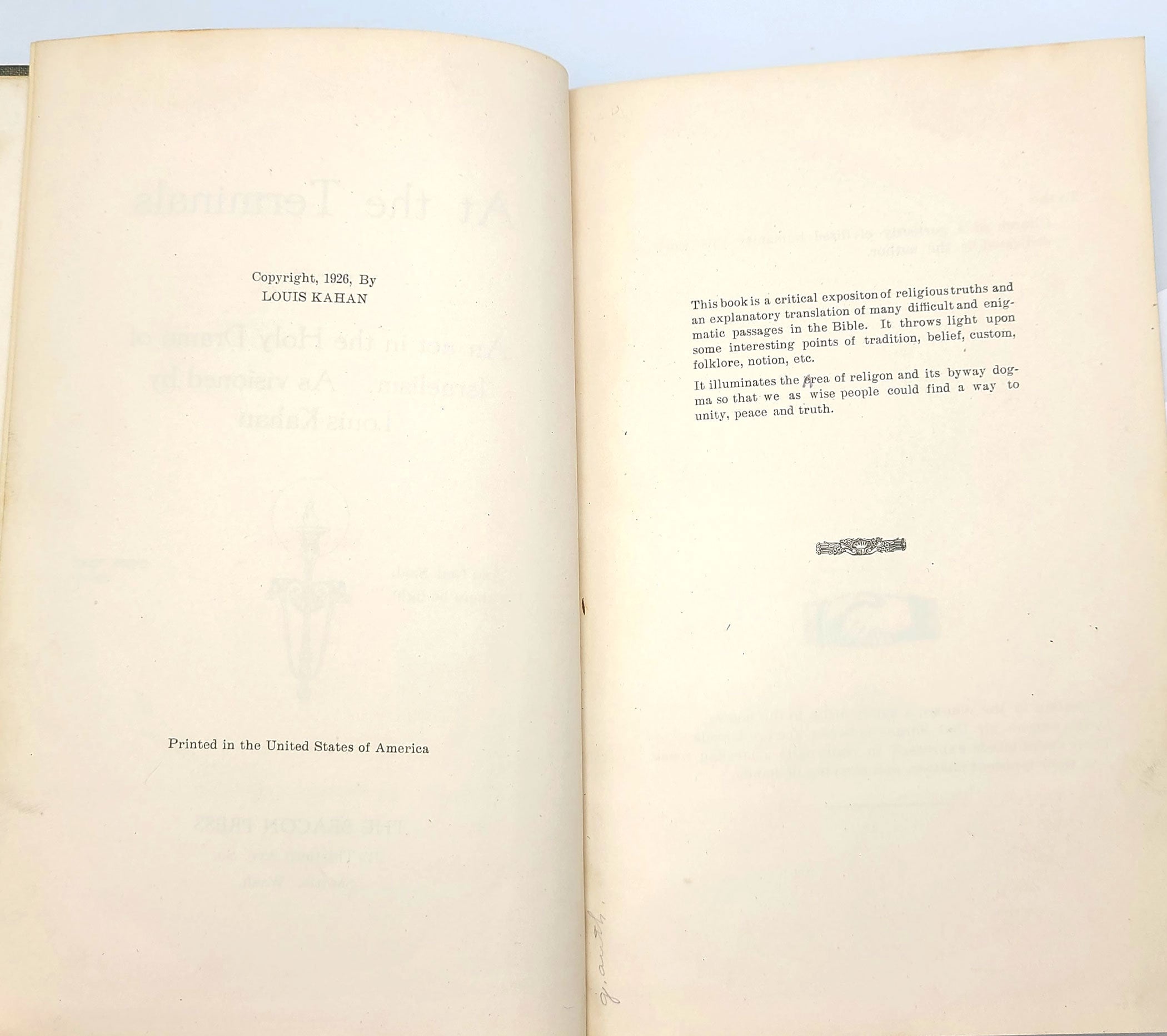 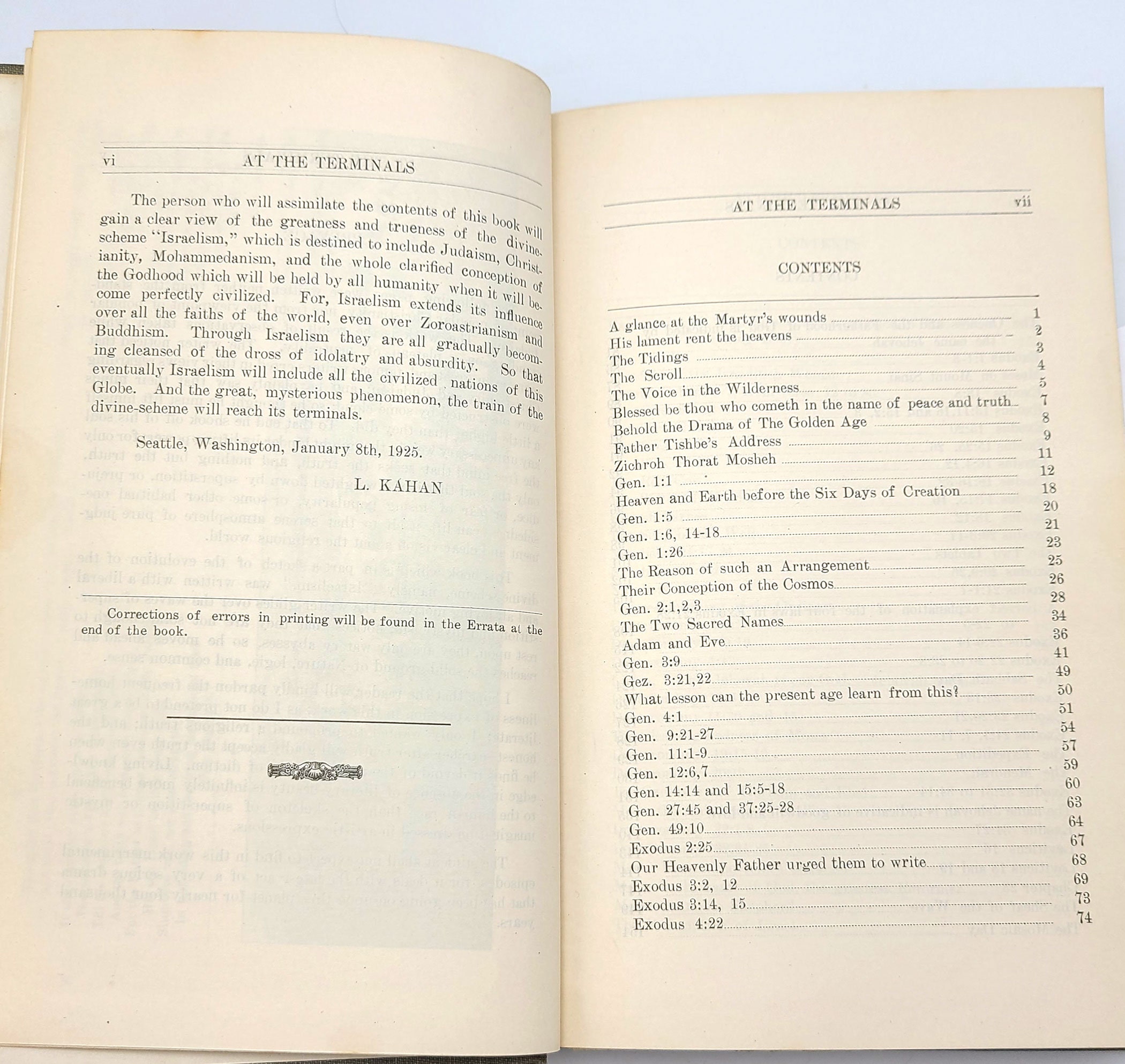 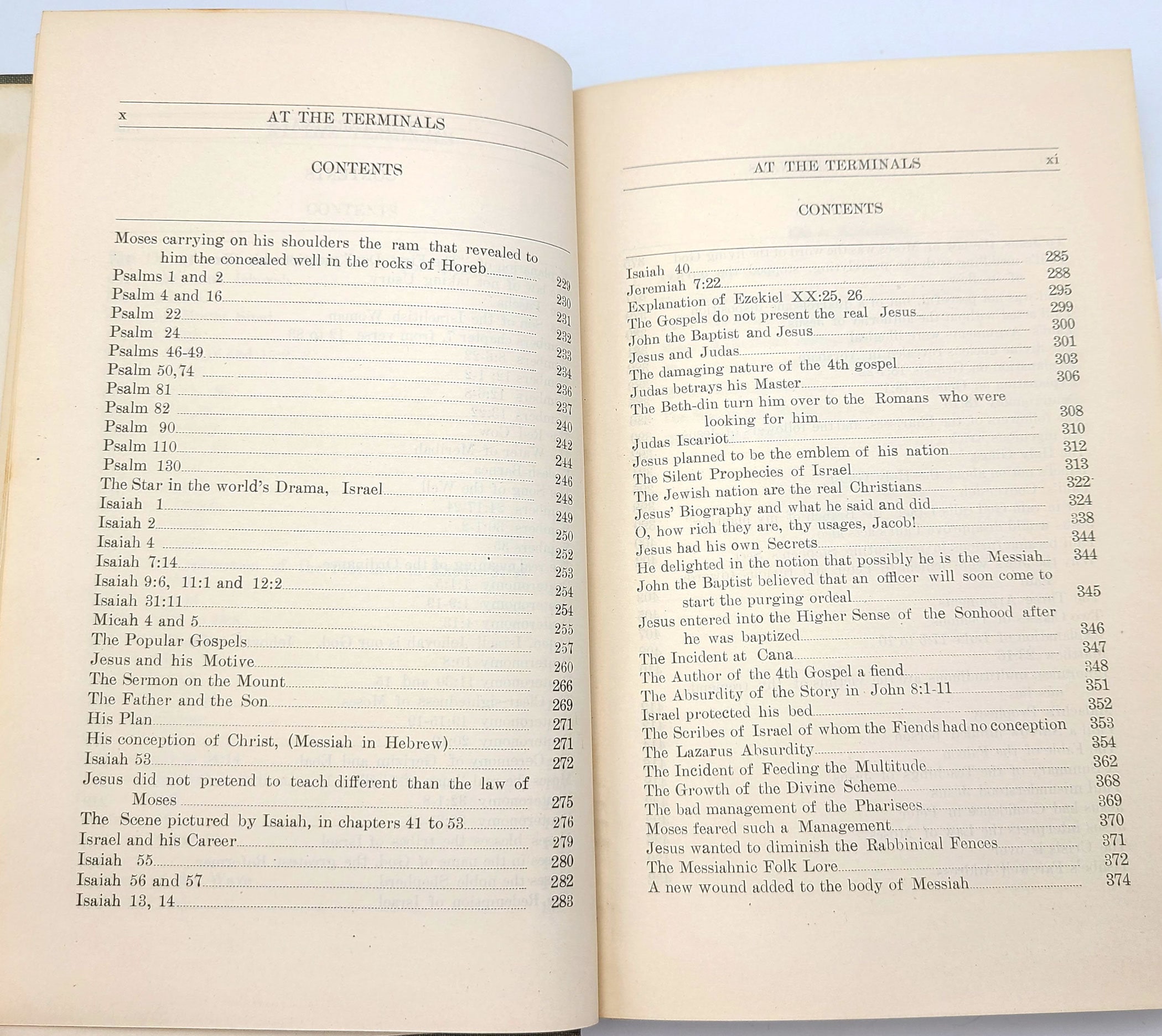 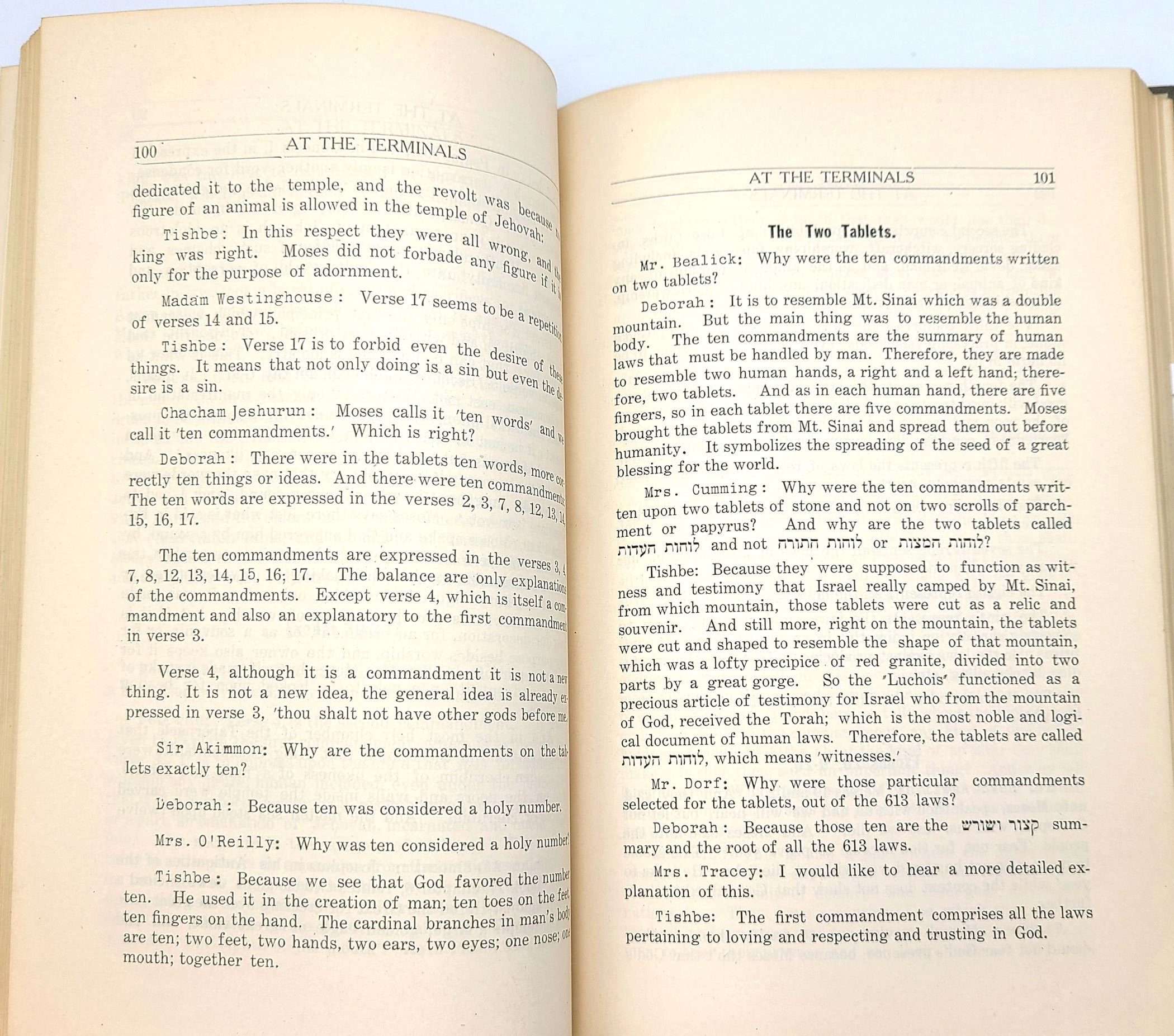 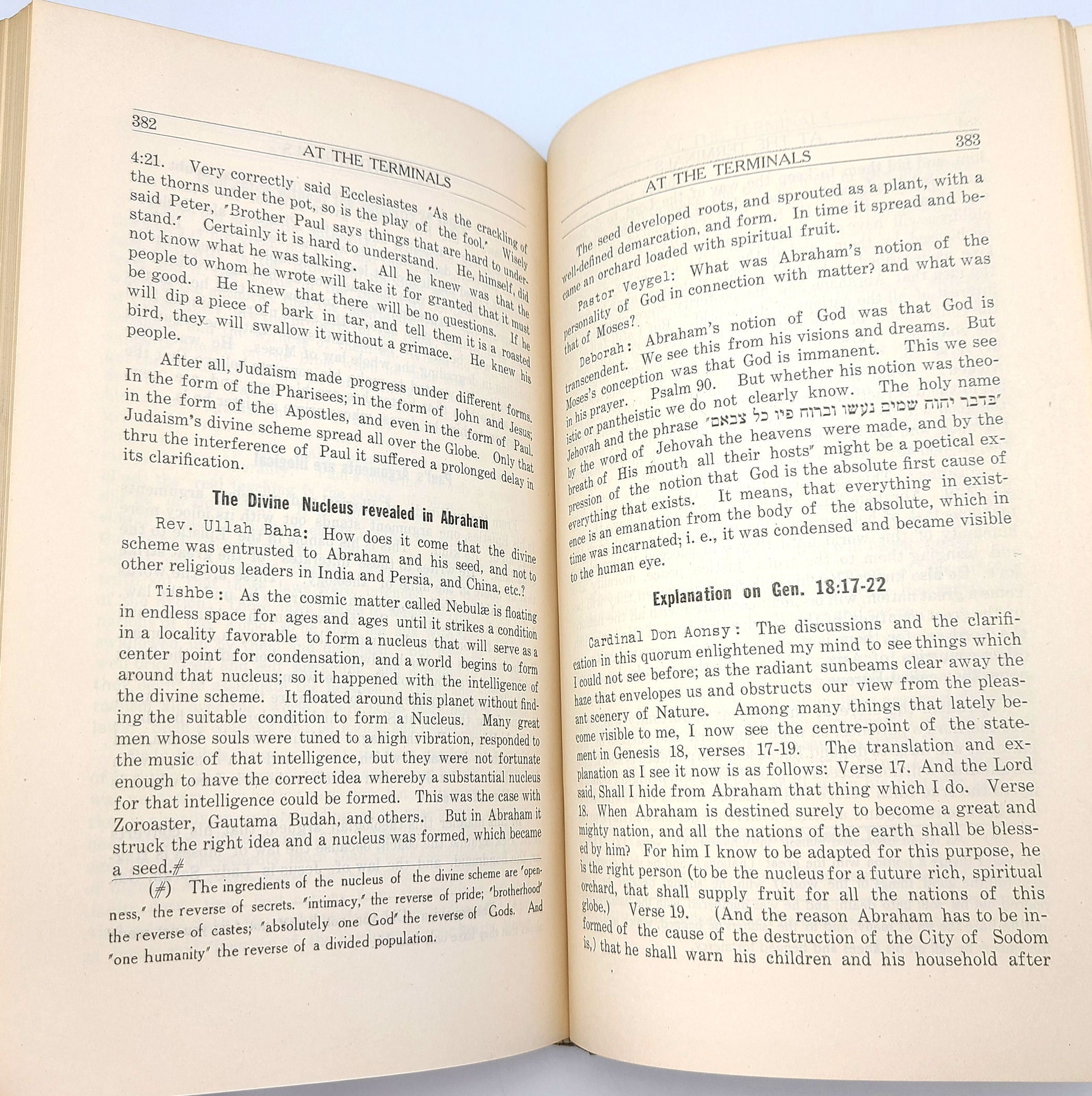 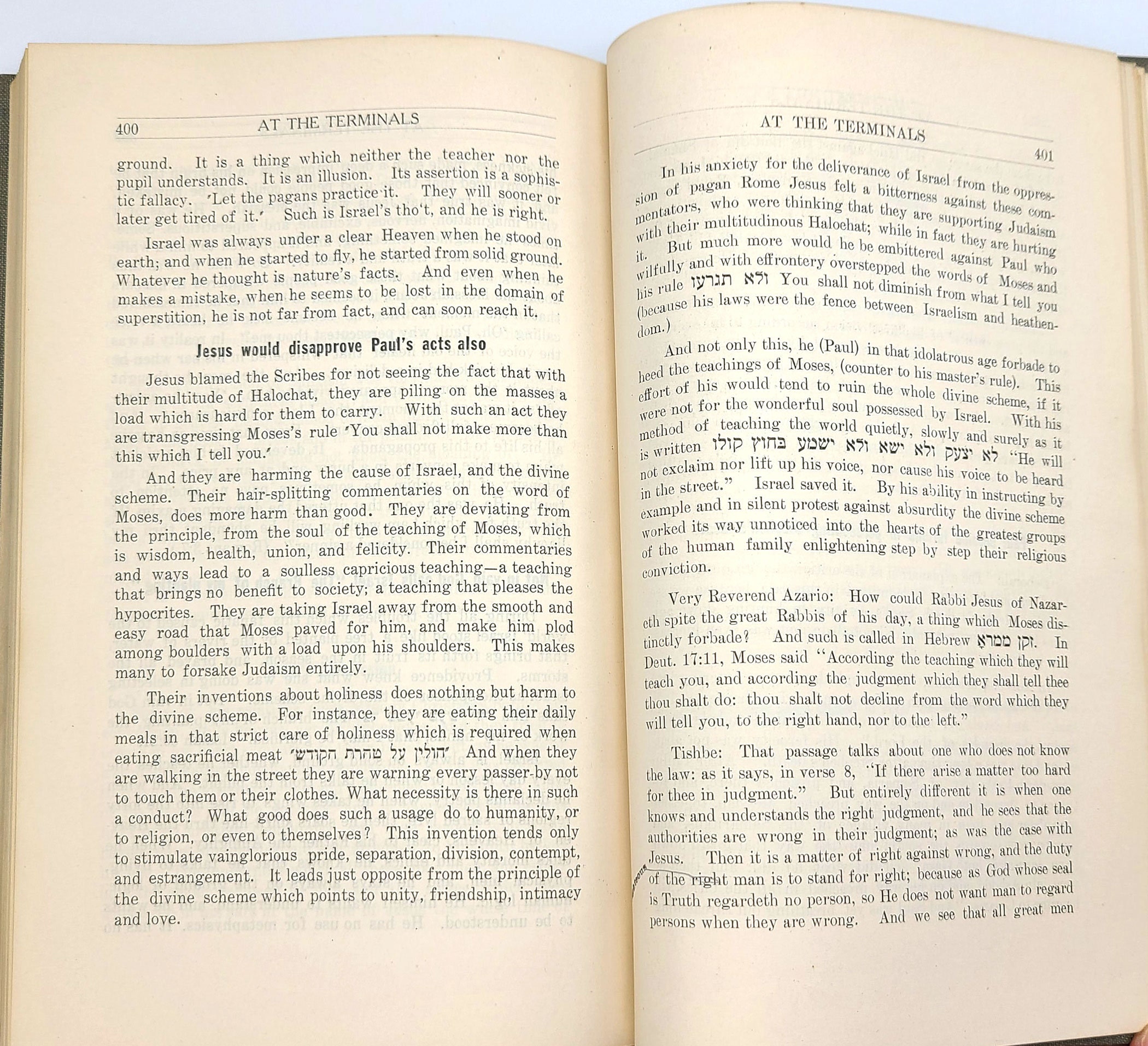 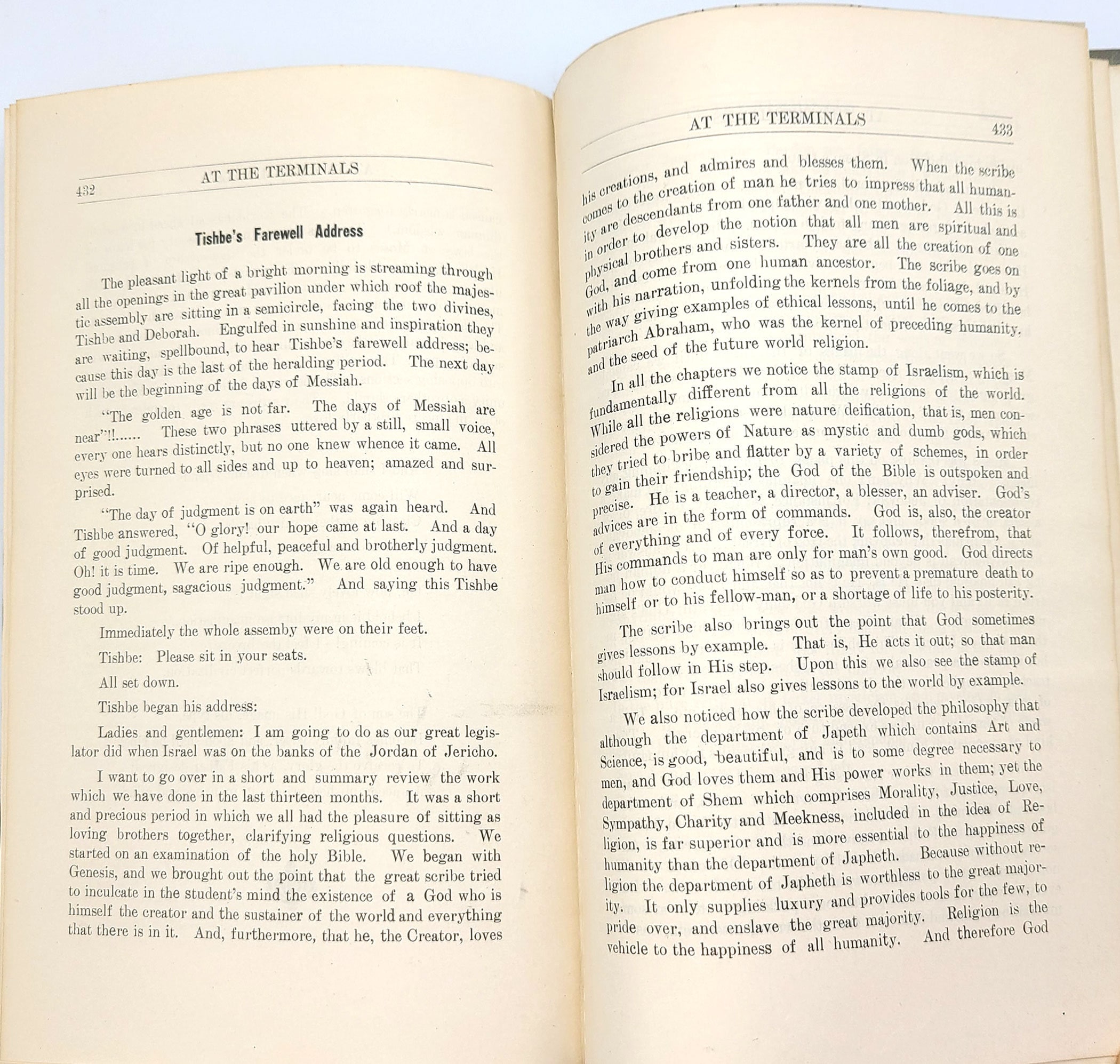 Title: At the Terminals: An act in the Holy Drama of Israelism. As visioned by Louis Kahan

Description: Signed by author on ffep. Gray cloth boards with black lettering. Light wear to boards. Spots of soiling in margins on a few pages. Some minor hand-written corrections throughout the text that appear to have been made by the author. One of the eight illustrations is missing. 438, [6] pp. 9 x 6 inches. Also, laid-in are a couple Beacon Press promotional slips for this publication.

The first part, titled At the Terminals of the Divine Train, is the author's presentation of what he calls "Israelism," which he makes through the explanation of passages of scripture from the five books of the Torah as well as a few passages from the Psalms and the Book of Isaiah. Kahan's work is written in the form of conversation between two teacher figures, Tishbe and Deborah, who answer questions from a panoply of individuals about the meaning of these obscure passages in the Bible. These other figures, who must number in the hundreds, appear to have been playfully named by Kahan, some of whom remind one of various figures on the world stage (e.g. Mr. Wilson, Mr. & Mrs. Harding, Mr. & Mrs. Balfour, Mr. Luther, Mr. Wesley, Lady Vernofski, Lady Force, Right Rev. Natajah, Sir Scripture, Maxim Mazur, Rabbi Avigdor, Miss Kahan, Mr. Vashon, Mr. Orage, Bishop Leadbes, Dr. Kvag Leeng, Brother Orth, etc.).

The second part of the books, titled "Volume II: The Scriptures about Rabbi Joshua the son of Joseph from Nazareth, which the proselytes in Israel added to the Bible, and called them 'The Gospels'." is an explication of the life and teachings of Jesus and his motives, including explanations of verses from Ezekiel, Jeremiah, and Isaiah. Tishbe and Deborah also explain problems with the Gospel of John, but also devote much effort to a harsh judgment on the person of Paul and his errors.

In a prefatory note, Kahan states that "This book is a critical exposition of religious truths and an explanatory translation of many difficult and enigmatic passages in the Bible. It throws light up on some interesting points of tradition, belief, custom, folklore, notion, etc. It Illuminates the area of religion and its byway dogma so that we as wise people could find a way to unity, peace and truth."

The author, Louis Kahan (ca. 1859-1932) had been a part of an early Jewish farming settlement in North Dakota, known as the Garske Colony, located near Devil's Lake. At the colony he had been known for being very devout and was referred to as Reb Lazer. Kahan was born in Poland and immigrated to the United States around 1882 and settled in St. Paul, Minnesota. He became a member of the Garske colony in 1886 and lived there until 1891 when he relocated his family to Seattle.