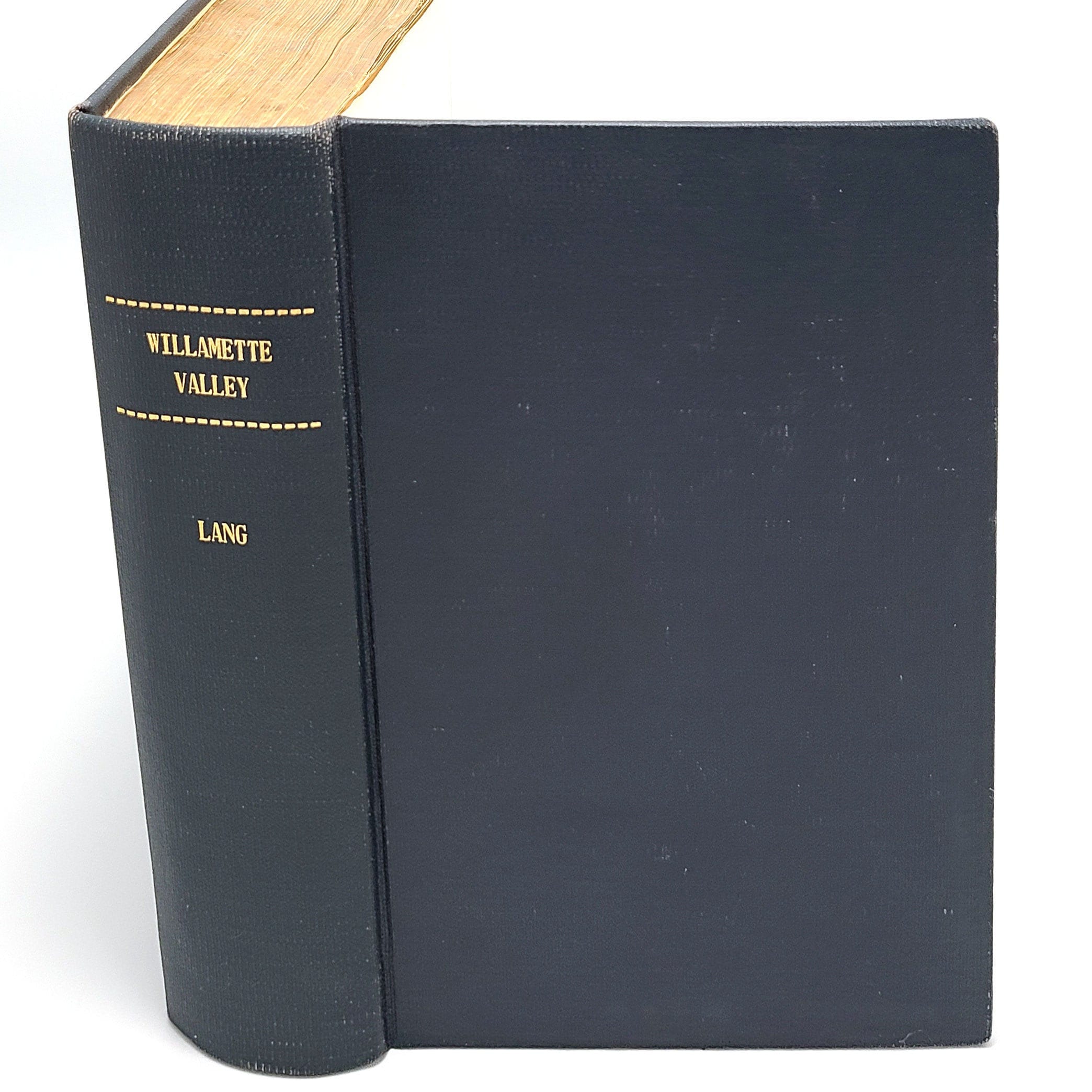 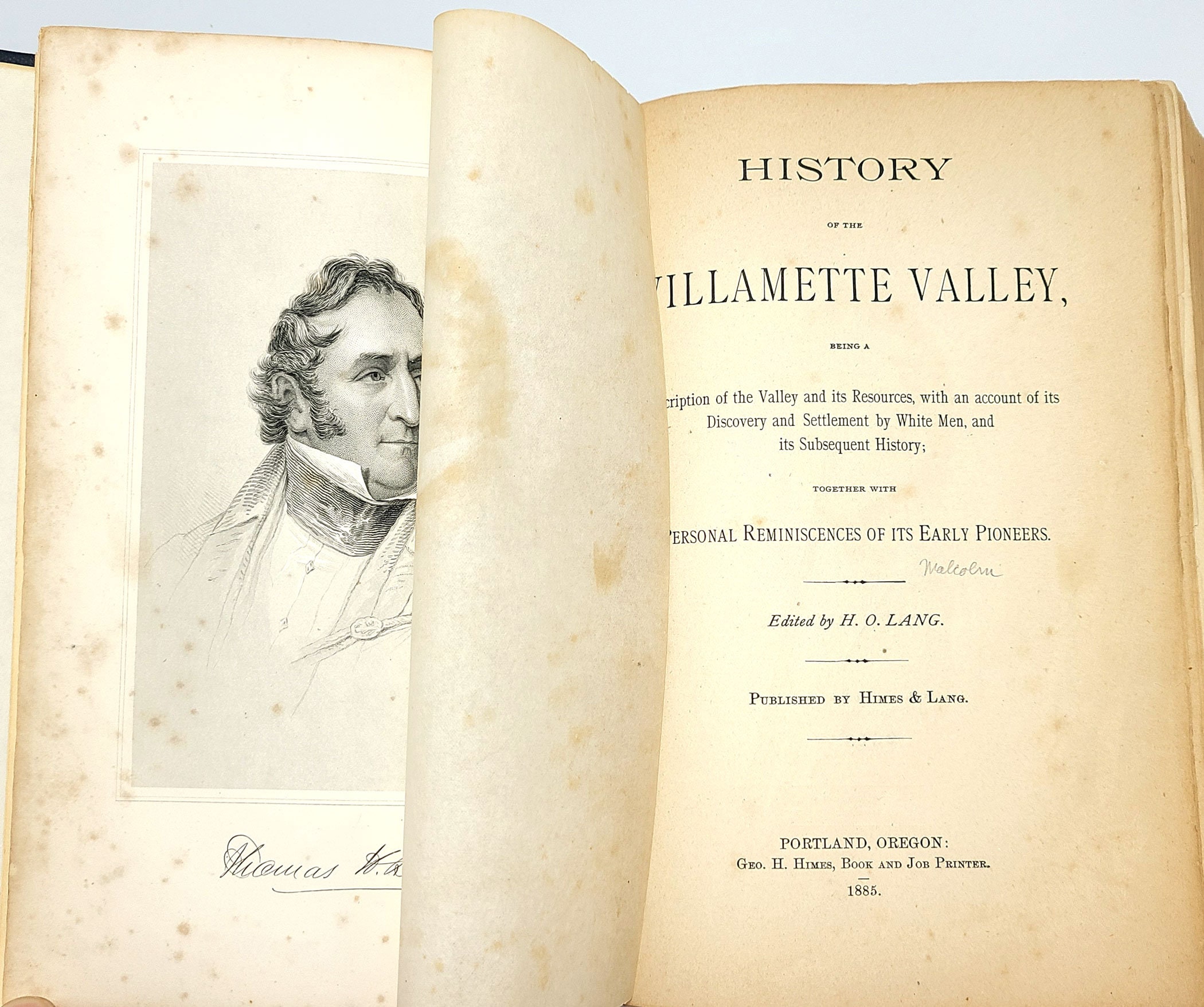 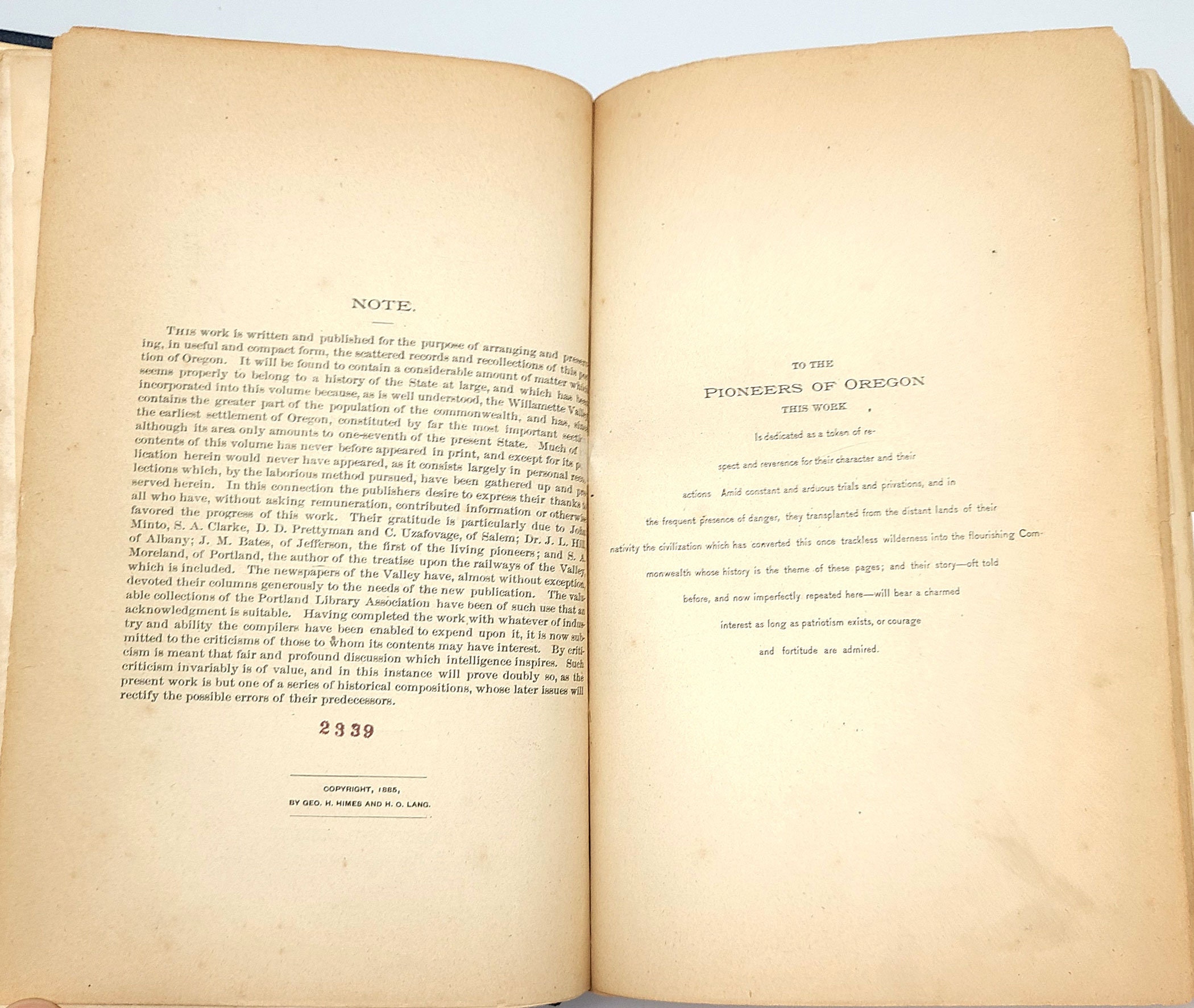 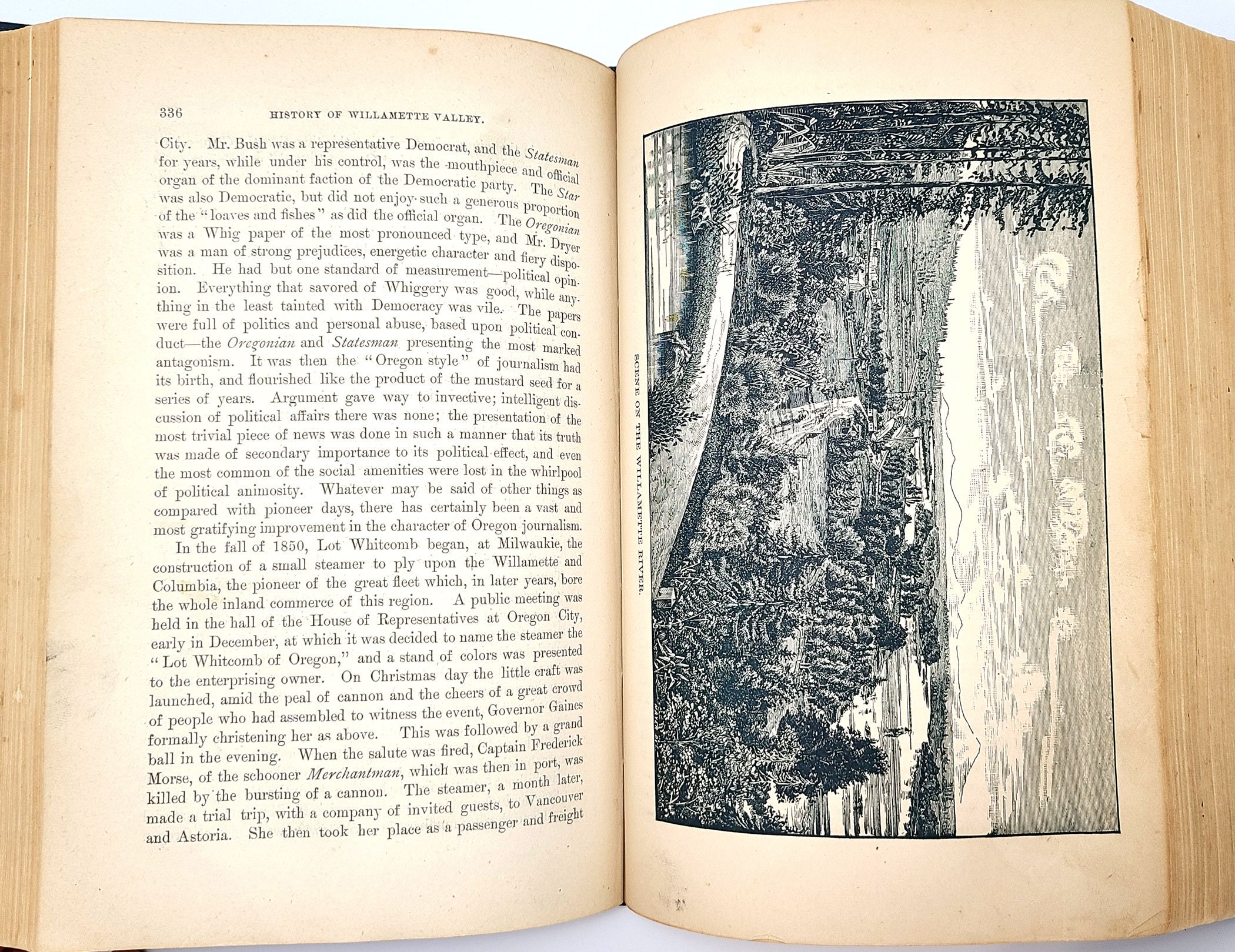 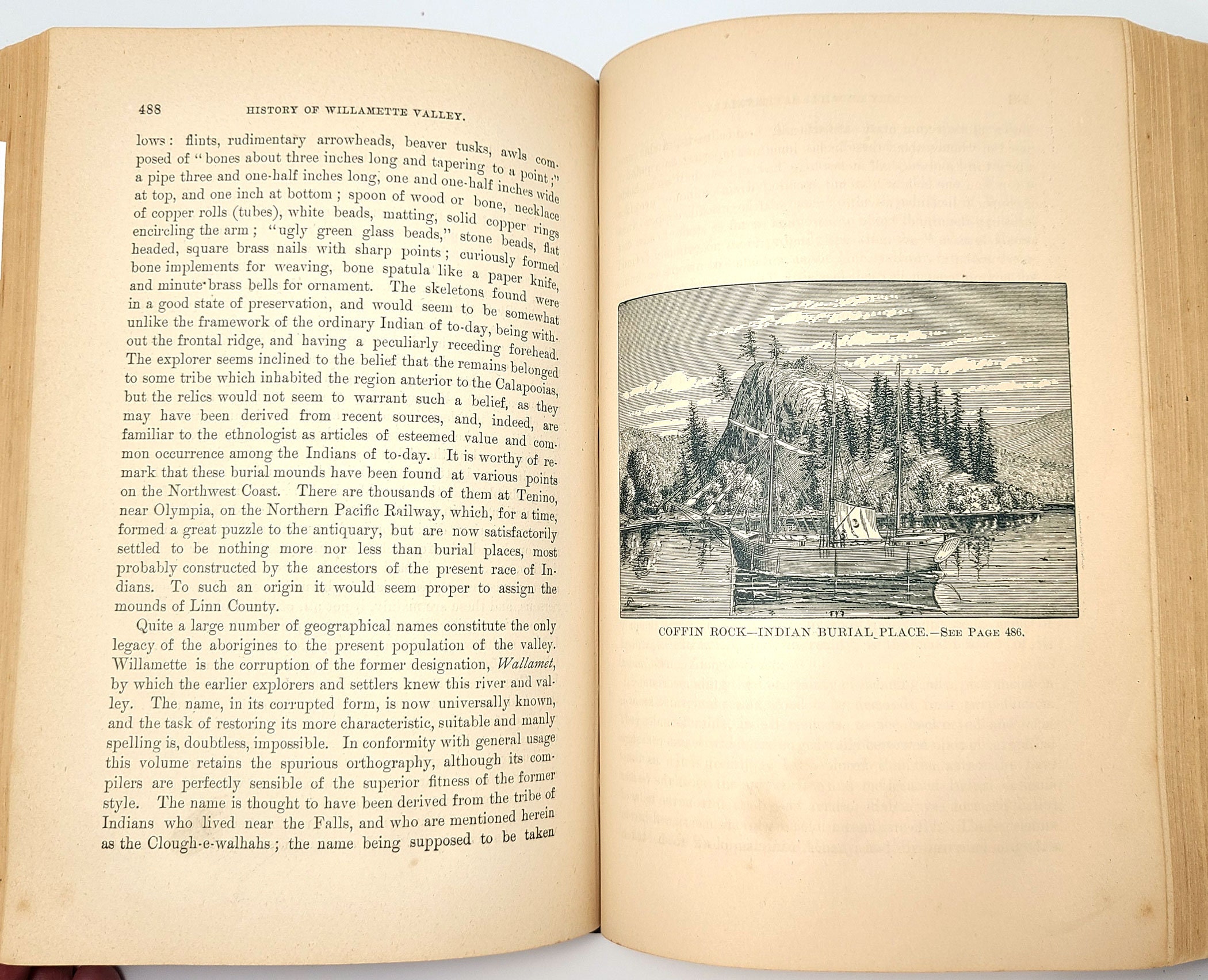 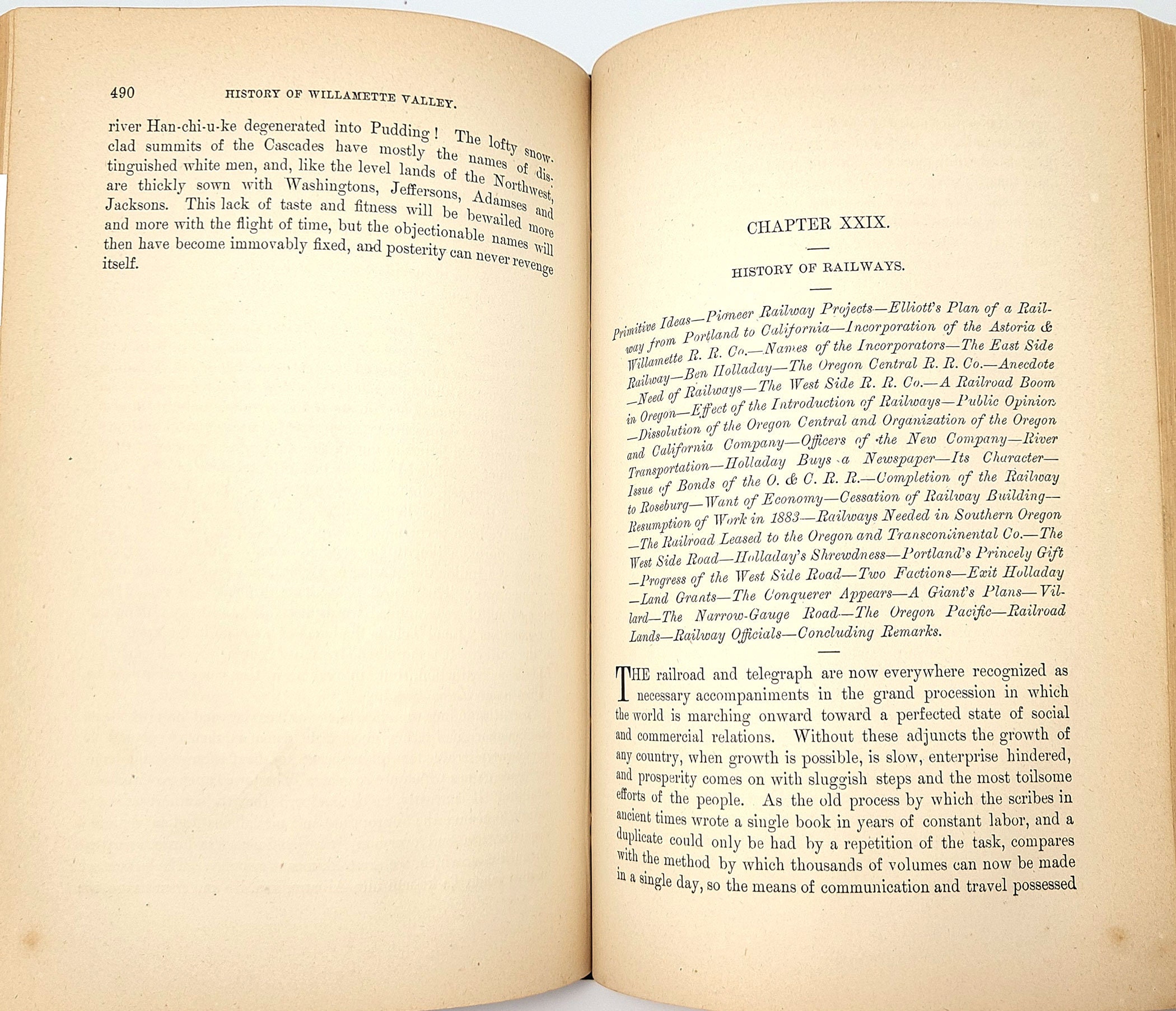 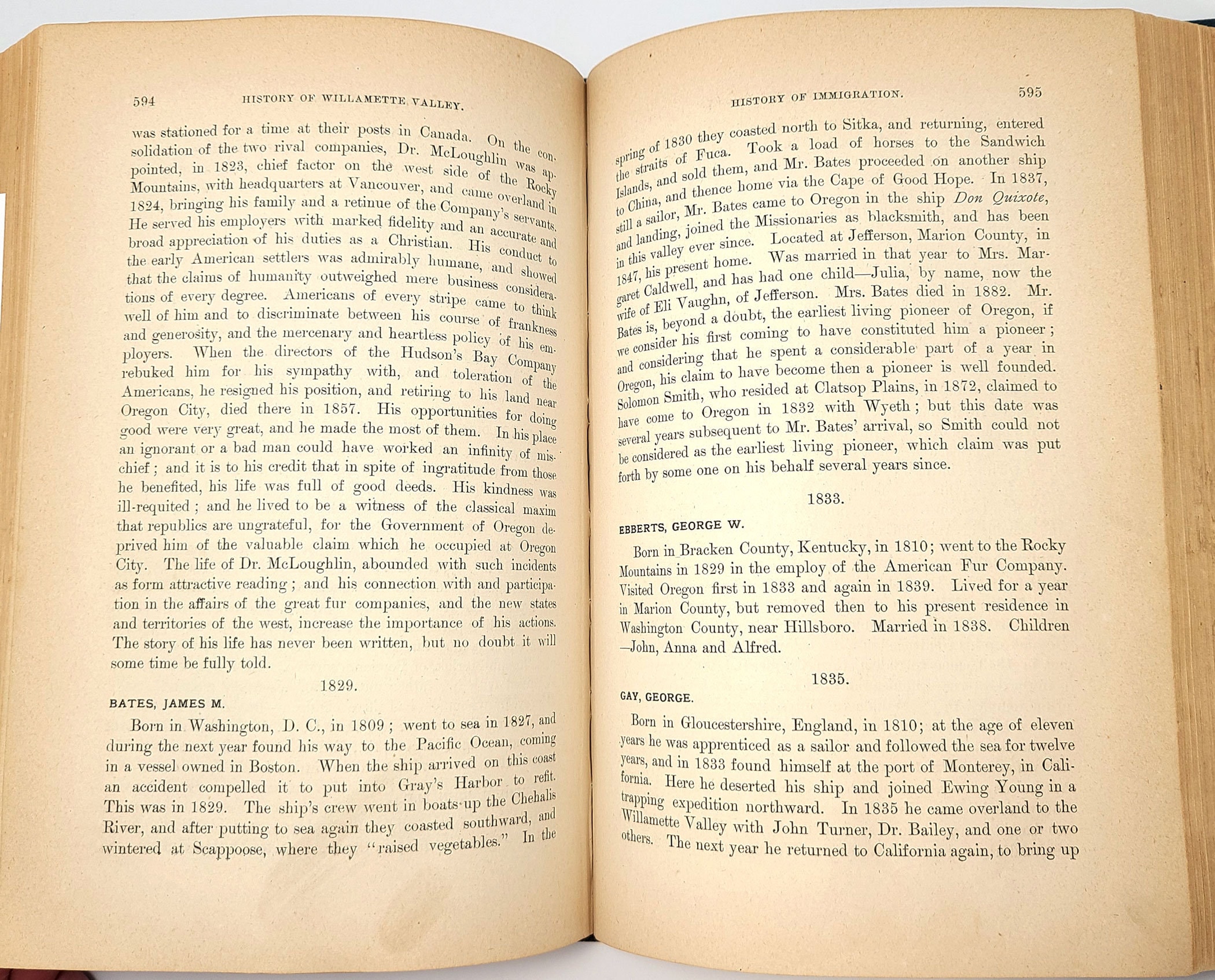 Title: History of the Willamette Valley, being a Description of the Valley and its Resources, with an account of its Discovery and Settlement by White Men, and its Subsequent History; together with Personal Reminiscences of its Early Pioneers

Description: Rebound in heavy blue cloth boards, gilt lettering on spine. Previous owner's name stamped on endpapers. A few leaves of the table of contents have very chipped edges (they had been loose and then tipped back in). Seven illustrations on plates, including frontispiece with tissue guard. Index. xv, 902, xiii pp. Errata slip tipped in at last page of index. Includes more than 300 pages of biographical sketches of notable pioneers, organized chronologically by year of arrival, from 1817 to 1884.

An extensive 900-page history of Oregon, covering the early Spanish exploration of the Pacific coast, the discovery of the Puget Sound and the Columbia River, early overland expeditions, political maneuvering of Russia and Britain, the activities of the Pacific Fur Company and the Hudson's Bay Company, early missions, the Provisional government, Dr. Whitman and the Emigration of 1843, early Oregon politics and government, the Whitman massacre, the creation of the Oregon Territory, about 120 pages on the various Indian wars, and a history of railways in Oregon.

This was Oregon historian Malcolm H. Clark, Jr.'s copy. Clark was the author of "Eden Seekers: The Settlement of Oregon 1818-1862," and wrote multiple articles that appeared in the Oregon Historical Quarterly between 1955 and 1974, and also edited and wrote the introduction for "Pharisee Among Philistines: The Diary Of Judge Matthew P. Deady."

The author, Herbert Oliver Lang (1854-1940), was born in Maine and moved to Stockton, California in his teens. In 1875 he graduated of the University of California-Berkeley. He produced "A History of Tuolumne County, California" in 1882 and spent part of 1883 in Roseburg helping compile historical material for A. G. Walling's "History of Southern Oregon." After working with the Portland publisher George Himes to bring out his "History of the Willamette Valley" (the publication of which actually bankrupted Himes), he continued to write for The Oregonian as their mining specialist.

Full title: "History of the Willamette Valley, being a Description of the Valley and its Resources, with an account of its Discovery and Settlement by White Men, and its Subsequent History; together with Personal Reminiscences of its Early Pioneers.